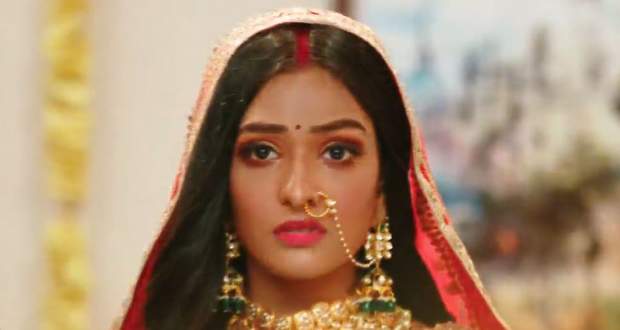 Meanwhile, Neelam tries to convince Rishi to go on a honeymoon with Lakshmi. Neelam tries to explain that according to Panditji's prediction if Lakshmi stays with him he will be safe.

On the other hand, at Rano's place, Dadaji is about to leave. Rano stops him and asks for giving her property papers and keys to lockers. Dadaji denies saying that he still needs confirmation if she is the right person to hand over everything.

At Rishi's room, Nanaji enters and tells Rishi that if he loves Lakshmi he has to propose to her right now. Rishi proposes to Lakshmi.

Further, Nanaji tells Rishi that work is important but not more than your relations.

Later, Rishi comes to his room where Lakshmi starts packing for their honeymoon. She asks him which T-shirts should she pack for him and gives him choices. He tells her she can pack whatever she likes and leaves the room saying he has an important con-call.

The next day, Rishi and Lakshmi reach Shimla and check-in into their hotel room.

© Copyright tellybest.com, 2020, 2021. All Rights Reserved. Unauthorized use and/or duplication of any material from tellybest.com without written permission is strictly prohibited.
Cached Saved on: Wednesday 13th of October 2021 10:13:44 AMCached Disp on: Thursday 21st of October 2021 09:03:20 PM