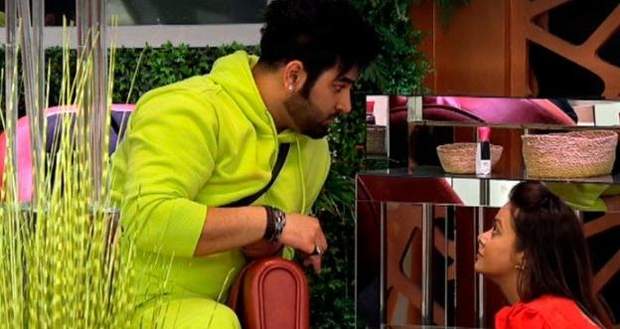 Rubina Dilaik tells Jyotika Dilaik to stay cordial with the housemates till they're in the show as it's not like they'll have to live with them outside.

Paras Chhabra makes his entry into the house with song 'Bachna Ae Hasino'.

Rahul Vaidya asks him if Jyotika took his name during the nomination while Vindu Dara Singh tells him to make a big fuss out of it.

Later, Paras talks to Devoleena Bhattacharya that she should be herself in the game.

Bigg Boss announces an immunity task while will save one housemate from this week's eviction.

Paras reads from the Bigg Boss rulebook in which One will be stamping the housemate's name in the gunny bags inside the wagon while the other will be putting them in the same housemate's barrel.

Later, Paras advises Devoleena that she should be the star of the show and should put X stamp in everyone's name.

Rubina tells Paras that she wants Nikki Tamboli out which shocks him.

Devoleena is outed in the first round after which she drowns Nikki's barrel in the pool in the second round.

Paras tells Devoleena to save Rubina but she disagrees.

Paras outs Nikki in the second round.

Nikki threatens to drown Rahul's barrel which sparks an argument between them.

Further, she snatches the gunny bags from Rahul's barrel's and throws them into the pool.

Later, Rahul cries in the bathroom area and says that he is disappointed that no one stood up for him.

Devoleena is sitting with Rahul and Rakhi while she reveals that Paras wants to save Rubina.