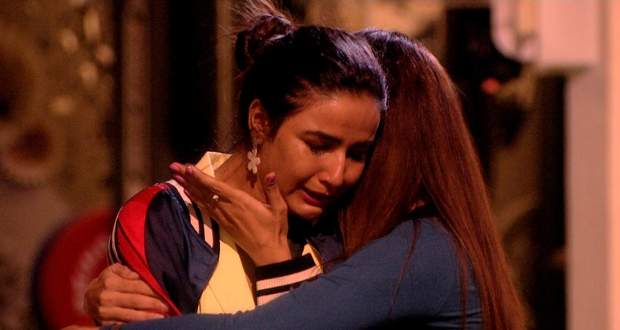 Inside the house, a task is going on in which housemates tell what false narratives they have heard about themselves.

Rakhi Sawant states that housemates are being partial with her which sparks a fight between her and the housemates.

Aly Goni says that it is falsely narrated about him that he bullied Vikas Gupta by not talking to him and then being befriended by him.

Later, Salman greets the housemates and says that he is not happy to meet them.

Salman goes on the topic of bullying and tells Rahul Vaidya and Abhinav Shukla that they were bullying Vikas and Eijaz also.

He further mocks other housemates by telling Eijaz that he is wasting his time by trying to give a false narrative of these great housemates of his.

He asks Nikki Tamboli why she didn't do Rakhi's bed and goes inside the house and does her bed himself.

He says that they would have done it with enthusiasm if they were in a serial or a movie.

He asks Eijaz to tell him in detail how he was accused of false narrating.

Rubina puts forth her point of view and Salman asks Aly if he agreed with her answer.

Aly says that the audience will believe what they see and cannot be influenced by other words while all the housemates agree with him.

He says that Aly, Rubina and Abhinav are accusing the makers of the show for putting them in nominations and further confronts them.

MPL caller of the week, Rahul asks Aly why he said that his work was complete and asks him if the show is scripted.

Salman tells Aly, Jasmin, Rubina and Abhinav to go to the garden area for elimination procedure.

Aly has a breakdown hearing the news while she consoles him.

She leaves after which housemates try to pacify Aly.