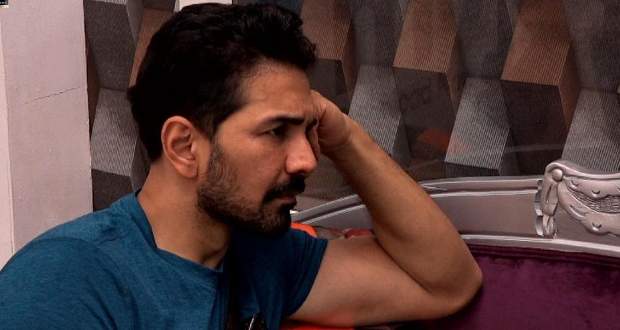 Today's Bigg Boss 14 11 December 2020 episode starts with everyone waking up to the song 'Tohfa Tohfa Tohfa'.

Arshi Khan argues with Eijaz Khan while Kashmira Khan is brought into the fight.

Manu Punjabi and Rahul Mahajan jump into the fight while Arshi threatens that she won't make food from now on.

Curtains open and everyone gets excited to see Rakhi Sawant with a huge gift box.

Nikki Tamboli emerges from the gift box and Rakhi tells Jasmin Bhasin that there's a gift for her in the confession room.

Jasmin goes into the confession room where she sees Aly Goni and jumps into his arms.

Rakhi starts encouraging Vikas Gupta to speak up against Arshi and calls her a copycat of Shilpa Shinde.

Aly scolds Jasmin for saying that Manu is his friend.

Arshi tries to talk to Rakhi and she tells her that she's not of her standard to converse which sparks an argument.

Vikas reveals to Abhinav about Kavita's husband, Ronit's tweet in which he accused Abhinav of sending obscene messages to Kavita.

Abhinav tells the news to Rubina Dilaik and she asks him if he has the WhatsApp messages of the true incident.

Aly tells them that Vikas told them the news to make them frustrated and make their game weak after which he confronts Vikas in front of everyone.

Vikas finds his things missing and tells the camera that he won't give them the satisfaction of his reaction.

Jasmin takes Rakhi to Moj room and tells her to do healing therapy on her.

Manu confronts Vikas for not doing the dishes which initiates a fight between the two.