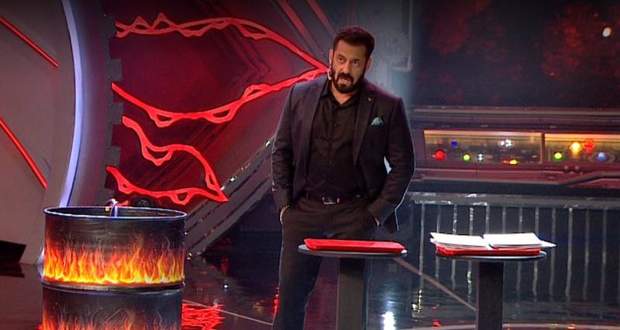 He shows housemates a video of Rakhi Sawant complaining about her bottle thrown into the pool with music.

Salman reveals to them that the Sultani Akhada has been opened and tells Arshi Khan and Rubina Dilaik to compete.

The first round ends in a draw while Arshi wins the second round and becomes the winner.

Salman gives them a task to put the stand of the contestant they want to create problems for in the future on the nail bed.

Later, Salman tells the housemates that he will partake in today's nomination process and says that Rakhi has a privilege to save one contestant from the nominations.

She chooses Abhinav Shukla which angers Sonali Phogat as she had promised her that she will save her.

Salman tells Rubina and Vikas Gupta to come into the confession room.

He shows them pictures of Aly and Rahul Vaidya and tells them to choose whom they want to save from eliminating while Sonali and Rakhi argue in the garden area.

Vikas and Rubina save Aly while putting Rahul in nominations.

Next, Aly and Rahul are told to choose from Arshi and Nikki to save and they choose Arshi.

Later, Eijaz and Sonali are told to choose between Rubina and Vikas to save and they choose Vikas.

Lastly, Nikki and Arshi are told to choose between Eijaz and Sonali to save and they choose Eijaz.

Salman tells the housemates that Rahul, Nikki, Rubina and Sonali are nominated and bids them goodbye.

Inside the house, Sonali orders Nikki to take her half-eaten food package away from her bed but Nikki doesn't pay any heed to her.

Nikki goes outside while Sonali throws the food on Nikki's bed.

Nikki sees that the bed is unusable and gathers all the housemates to show them the bed.

Sonali says that Nikki has come through setting with people which angers her and she creates a scene.

Upcoming Bigg Boss 14 episode update: Aly gets into a fight with Rakhi.