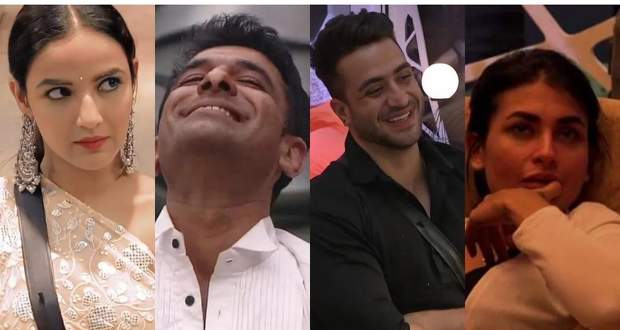 Today's Bigg Boss 14 11 November 2020 episode starts with Abhinav Shukla coming to the witness box and being asked questions like does he feel unfit for Bigg Boss, does he have a Superiority complex, and other things.

Next up is Nikki Tamboli who is questioned regarding her fights with her friends, whether she is selfish or not, why she doesn't talk to Rubina Dilaik and Abhinav.

Then Jaan Kumar Sanu is next who is asked and questions like does he get influenced by another contestant, him gossiping about Nikki to others after which Farah Khan asks Nikki if she trusts him to which she replied with no even not of the Bigg Boss house.

Rahul Vaidya is the next one who is asked questions about his friendship, him switching off mid-task and his alliance.

Next up is Shardul Pandit who is asked questions regarding him talking to the camera if he is afraid of elimination.

At last, Kavita Kaushik is asked questions regarding her re-entry in the Bigg Boss house.

After discussing with Charul Malik and Amit Tyagi, Farah Khan announces that they are nominating Shardul for this weeks elimination.

Afterwards, Rahul is seen imitating Nikki and making fun of her to which Jaan laughs but she doesn't react.

Eijaz and Nikki talk about Kavita's actions in the Farah Ki Adalat while Jasmin Bhasin, Abhinav, Rubina are seen talking among themselves.

Later, Eijaz and Rahul argue when Eijaz accuses him of ordering around by calling.

Then, Nikki is seen sitting with Abhinav and Rubina with whom she clears her misunderstandings and talks about Jaan.

Meanwhile, Aly Goni and Jasmin are seen spending time together.

Afterward, the housemates get confused seeing a ghost chair in the garden area when all guess it as a part of the nominations task.

Bigg Boss calls all contestants one by one and tells them to convince one of their friends to destroy one of their things to save themselves from nominations.

During the task, Bigg Boss tells Abhinav that everyone has to take their own opinions and to not take advice from Rubina and tells him that he is letting because it was his first time.

Rubina destroys her hair styling machine in order to save Aly from elimination after which Jasmin praises her and tells her that she can use her styling mash in in the future.

© Copyright tellybest.com, 2020, 2021. All Rights Reserved. Unauthorized use and/or duplication of any material from tellybest.com without written permission is strictly prohibited.
Cached Saved on: Sunday 9th of May 2021 10:43:50 PM