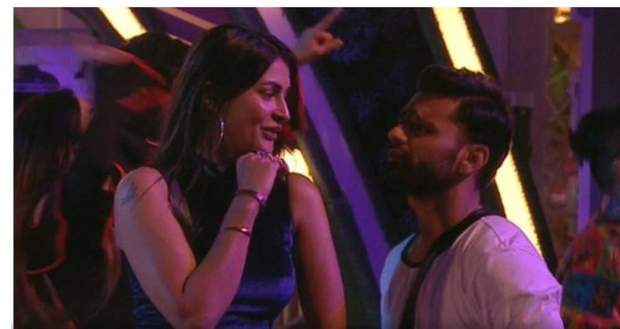 Today's Bigg Boss 14 11 November 2020 episode starts with Bigg Boss telling Eijaz Khan to convince Jaan Kumar Sanu to put his family photo in the shredder if he wants to be safe from elimination.

He tells the same to Jaan and the latter does it.

Eijaz feels bad after which he is seen crying to Shardul Pandit voicing his emotions.

Nikki Tamboli is up next who is told to convince Rahul Vaidya to take the declaration certificate from the storeroom, read it to everyone, sign it and give it to Jaan to be safe from elimination.

She tells him the same and he does it.

Next up is Pavitra Punia who is told to convince Eijaz Khan to destroy the two photo frames that he has to be safe from elimination.

Eijaz destroys the pictures while Pavitra begs him to not do it while crying.

Eijaz tells himself that he has cried too many times today while Pavitra and Shardul come thereafter which Shardul reveals that Rahul was laughing due to which the latter and Eijaz fight.

Lastly, Rahul has to convince Pavitra to dip ten of her clothes in the colour filled tubs and put it in the storeroom to get safe from elimination.

She does so while crying because she doesn't have any more clothes thus making him safe.

Bigg Boss announces that nominated contestants are Shardul and Rubina.

Day 40 starts with everyone waking up to 'Party on my mind'.

Rahul confesses that he has known a girl named Disha Parmar and revealing that it's her birthday and then confesses his love further asking her hand in marriage.

Rahul then says that if she answers yes then to contact him somehow and tell him.

Bigg Boss announces that there will be a party which will go on till the morning with some musical guests and that the last person to be dancing will become the next captain of the house.

The garden area opens up and DJ Chetas is the first guest who plays Bollywood mashups.

Bigg Boss tells them to vote out two contestants by the majority.

Everyone votes for Rubina and Eijaz while Abhinav and Eijaz fight.

Eijaz gets angry at Pavitra because she voted against him after which she stops him and Abhinav from getting violent.

Bigg Boss asks Jasmin to tell their decision after which Eijaz and Rubina are out of the task.

Bigg Boss welcomes Anu Malik in the house after which he sings songs for contestants.

Aly is convincing everyone to out Kavita Kaushik in the next round.

Bigg Boss against tells them to out two contestants and they choose Kavita but argue choosing the second contestant while Pavitra and Eijaz are flirting.

Nikki and Aly fight after which he votes for Jaan and also convinces Shardul to vote for him.

Bigg Boss asks Jasmin their decision and thus Jaan and Kavita are out of the task.

Jaan and Aly get into an intense fight.

Neeti Mohan is the next guest who sings songs like 'Ishqwaala love' while Aly convinces Rahul for his captaincy.

Upcoming Bigg Boss 14 episode update: Shaan to be the next guest for all-night party

© Copyright tellybest.com, 2020, 2021. All Rights Reserved. Unauthorized use and/or duplication of any material from tellybest.com without written permission is strictly prohibited.
Cached Saved on: Sunday 17th of January 2021 12:27:12 PM