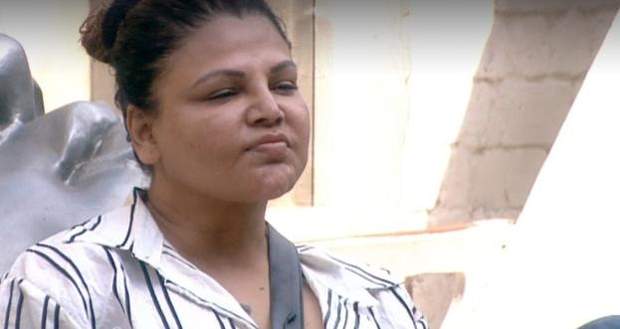 Today's Bigg Boss 14 12 January 2021 episode starts with (Bigg Boss Day 100) the housemates getting into an argument regarding who will get to go inside the BBMall and who will be denied entry.

Sonali Phogat says that Rubina Dilaik and Abhinav Shukla are being servants for Rakhi which creates a ruckus.

Later, Aly Goni tells Rakhi that his heart is broken due to her wishing that he and Jasmin Bhasin separate.

Rakhi says that eviction is not in her hands while Rahul tells her to apologize to her.

Vikas Gupta sees that the luxury good are there and calls in Nikki Tamboli they steal coffee and chocolates and then inform other housemates of the goods.

Later, Rubina asks Nikki what her take is on Rahul's friendship and questions her why he didn't save her.

During midnight, Rakhi tells Sonali and Aly and Rahul are dumb and gossips about other housemates.

Later, Arshi goes to Aly and tells him that Sonali has feeling for him.

Bigg Boss Day 101 starts with everyone waking up to the song 'Crazy Kiya Re.'

Eijaz Khan tells Rakhi that she should know her responsibility of being a captain which sparks a fight between them.

Rakhi orders Eijaz to organise the tissue papers while he denies and they fight about it.

Rahul tries to intervene but she threatens him and everyone that she will punish everyone who doesn't follow her orders.

Later, Rakhi dances in front of Aly and he tells her that she is like an aunt to him and to not take it as an insult.

Rakhi cries to others saying that Aly, Arshi and Nikki are insulting her and are going to her age which creates an argument between them.

Abhinav informs Rakhi that coffee is missing and she questions everyone about it.

Rakhi allows Vikas to take something while Arshi and Nikki get angry over it.

Rahul states that Rakhi is the worst captain in the history of bigg boss while Rubina stands up for her and fights with him.

© Copyright tellybest.com, 2020, 2021. All Rights Reserved. Unauthorized use and/or duplication of any material from tellybest.com without written permission is strictly prohibited.
Cached Saved on: Thursday 29th of July 2021 01:38:44 PMCached Disp on: Sunday 1st of August 2021 06:35:47 AM