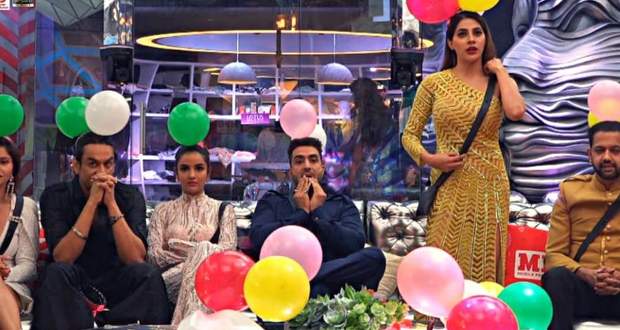 Salman tells Rakhi Sawant to predict other contestants' future in the game as she has seen the most episodes of this season.

MPL caller of the week, Aashish Seth asks Eijaz Khan why he thinks that Rubina Dilaik does not have deserving power.

Inside the house, Rubina and Jasmin Bhasin initiate a fight with Eijaz.

Salman welcomes Rahul Vaidya and asks him questions regarding his sudden leave from the Bigg Boss house.

After asking a lot of accusing questions, Salman asks him if he wants to enter the house of Bigg Boss once again.

Salman asks housemates their views on Rahul wanting to reenter the house and reveals that the decision is in their hands only.

All the housemates give positive answers except Karishma Shah.

Salman makes Vikas Gupta and Arshi Khan wear two bombs and tells other contestants to decide who they want to explode and kick out from the game.

Salman further tells them that it's going to rain in there and tells Rubina to go to the shower zone.

He says that he will ask some questions and the housemates will reveal if they agree or not.

If the housemates do not agree with Rubina's answer then things will be poured on her.

Salman says that Abhinav Shukla is eliminated but reveals to the audience that he is just joking.

Abhinav is saying his goodbyes while Salman reveals to them that he is just joking and that no one is eliminated.

Inside the house, Arshi pokes Vikas by touching him and congratulating him while he pushes her away and storms off.

Vikas is talking in English and Bigg Boss warns him to speak in Hindi only.

However, he keeps talking in English and says that rules do not matter in this house.