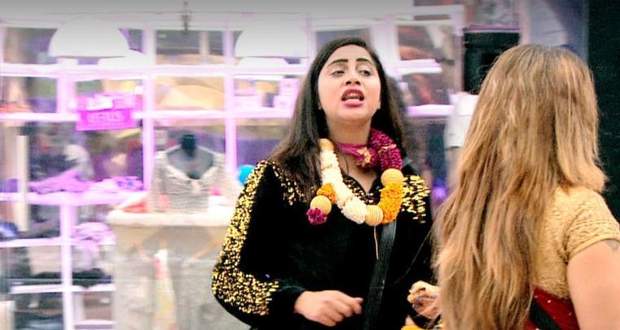 Eijaz Khan tells Rakhi to not order for doing something that is not his duty while she tells him that she will take full advantage of her captaincy.

Bigg Boss Day 102 starts with everyone waking up to the song 'Jahan Teri Yeh Nazar Hai'.

Rubina reads from the Bigg Boss rulebook about the captaincy task in which Abhinav Shukla and Rakhi are neighbours and the rest housemates are their family who is building a wall to separate Rakhi from him.

At the end of each round, Rakhi will get limited time to click a picture of Abhinav from the polaroid picture and will have to get a clear picture of him.

Rakhi's family includes Eijaz, Sonali, Rahul Vaidya and Aly while the rest of the housemates are Abhinav's family members.

If Rakhi manages to get a clear picture of Abhinav and shows it to the camera in the storage room, then she will win the round and if not, Abhinav's team win's the round.

Vikas steals the camera and hides it under the sofa while others are inside.

The first round starts and Abhinav's team starts making the wall while Rakhi waits for the camera to come.

Bigg Boss informs that the camera is in the house since the beginning of the task which confuses her and she starts searching for it.

Vikas accuses Arshi of stealing the camera while Arshi tells everyone that Vikas might have done it to show himself as the mastermind.

The first round ends and Bigg Boss tells the housemates to go to the living room sofa.

Bigg Boss announces that Rakhi's team the first round as Abhinav's team broke a rule.

Later, the second round starts and ends while Abhinav calls Rahul 'Nalla (useless)' which sparks a fight between the two.

Bigg Boss announces that Abhinav's team wins the second round.