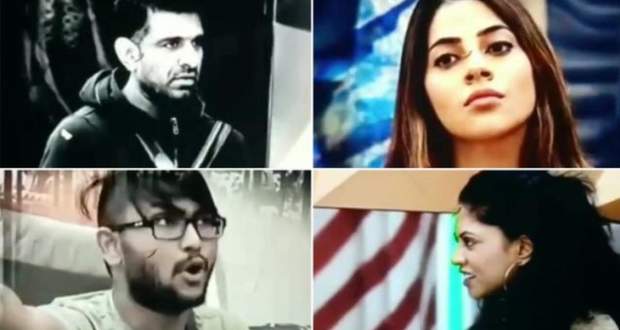 Today's Bigg Boss 14 13 November 2020 episode starts with Eijaz Khan telling Jaan Kumar Sanu to not let anyone spit in the kitchen sink after which he and Rahul Vaidya fight on the same topic.

Aly Goni apologises to Nikki Tamboli and they hug.

Later, Eijaz is seen running after Pavitra Punia and they are teasing each other after which Eijaz is hugging Pavitra from behind and Aly sees them and teases them.

Meanwhile, Pavitra tells Nikki that she's scared of her feeling for Eijaz after which the latter tells her that she doesn't romantically like Jaan and tells her she is starting to like Aly.

Afterward, Nikki tells Jaan to not kiss her anymore and tells him that he is not her type.

Eijaz is seen telling Pavitra that he's starting to see her from a different view while Pavitra reveals to him that she's scared of love and that it will take her time.

Day 42 starts with everyone waking up to the song Khalbali.

Kavita Kaushik taunts Jaan that no one wants to work as they have injuries but where does that injury go when they are working out.

Kavita and Eijaz get into a verbal spat.

Housemates witness the cages and guess what it is for.

Bigg Boss tells them to pick two contestants to put them in cages based on their behaviour.

Kavita takes Pavitra's name while Eijaz defends her due to which they fight and she unearths past incidents while Eijaz tells her to stop.

She says that she's not scared of him and again says that he's playing the victim card and they continue the fight.

Nikki chooses Jaan and says that it is personal and that he is very disrespectful as she told him to not kiss her but she did and then chooses Abhinav Shukla.

Aly takes Jaan's names and again picks up the topic if her not respecting Nikki's decision and then chooses Kavita next.

Jaan is telling her side of the story to Pavitra and Shardul Pandit after which Pavitra tells him to drop the conversation.

Nikki is talking about the same thing to others while Pavitra comes there and confronts her after which Nikki and Jaan get into a heated fight.

Bigg Boss tells them that Jasmin Bhasin, Abhinav, and Rubina Dilaik didn't understand the reasoning behind the task and nominates them after which he tells Captain Aly to choose from the three and he chooses Abhinav and Rubina.

Shardul is talking to Abhinav while Pavitra needles in their conversation after which she and Shardul argue.

Kavita is angry at Jaan for not doing his duty after which Aly confronts him about it.

Nikki and Kavita get into a verbal spat.

Pavitra tells Shardul that she likes Eijaz after which they talk about the possible consequence while Eijaz comes there and Shardul leaves.

Eijaz tells her that he won't make her uncomfortable but will still spoiler and says that he will drag her to meet with his father when he feels that she's comfortable and further tells her to focus on her game.

© Copyright tellybest.com, 2020, 2021. All Rights Reserved. Unauthorized use and/or duplication of any material from tellybest.com without written permission is strictly prohibited.
Cached Saved on: Friday 6th of August 2021 03:07:03 AM