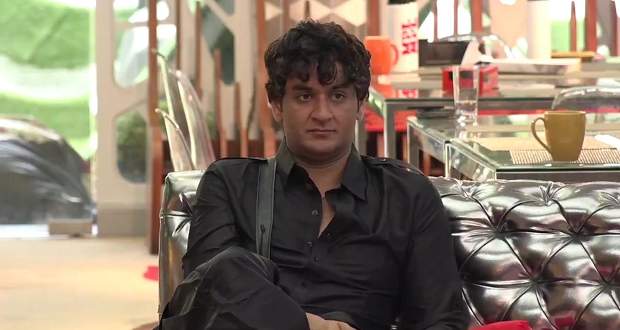 Arshi Khan mocks Vikas Gupta and he replied to her in English which was noticed by Bigg Boss and he warns him to speak only in Hindi.

Manu Punjabi tells Arshi that her paranthas are raw and tells her to change duties.

Arshi goes to everyone and makes fun of Vikas.

She tells Vikas to say sorry to her and she'll stop frustrating him but he declines and the two go back and forth fighting.

Vikas tells her that when he gets to use the joker card he will throw her out of the house and until then he will make her life a living hell in here.

Arshi gets physical with him which sparks an argument between the two and she removes her mic.

Arshi talks ill about Vikas' mother and he pushes her into the pool which creates chaos in the Bigg Boss house.

Vikas says that he wants to leaves while Rahul Mahajan tells him to be a gentleman and goes after apologizing to her for pushing her into the pool.

He apologizes to Arshi and breaks down in the bathroom area saying that he'll leave the show.

Everyone sits in the living room area and Bigg Boss says that the freedom to speech does not allow them to talk bad about someone's life, family, or past.

Bigg Boss further says that Vikas was provoked but that does not mean that he has the right to break one of the major rules of the house and tells him to exit through the front gate.

Manu Punjabi tries to tell Kashmira Shah to keep her distance from Arshi.

The gents of the house puck outfits from the Big Boss 14 Mall.

Abhinav Shukla and Aly Goni steal peanut butter from the kitchen while Nikki Tamboli and Manu are seen conversing.