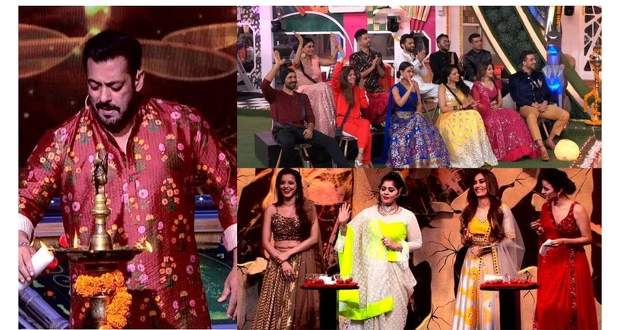 Today's Bigg Boss 14 14 November 2020 episode starts with the task between the contestants where they categorise other inmates from Rocket, Fuski Bomb and Chakri.

Salman Khan greets the audience and says that according to the Voot premium users Rubina Dilaik is the rocket and Jaan Kumar Sanu is both Fuski Bomb and Chakri.

Salman wishes the audience happy Diwali and then greets the inmates.

Salman asks Abhinav Shukla and Rubina if they understood the reason for their punishment.

Afterwards, he tells them the reason and confronts them and Jasmin Bhasin about it.

Kavita Kaushik tells Salman that Eijaz used the same foul words the previous day due to which she was eliminated.

Abhinav justifies his reasoning while Salman tells him that it is not a school and to not sugar coat his words as it is a reality show.

Salman says that the whole of India is confused as to why did they sacrifice in the nomination task and confronts Aly Goni first on the topic.

Afterwards, he asks Jasmin what is her connection with the doll.

Afterwards, a clip of Rahul Vaidya and Nikki Tamboli fighting and then him apologizing to Jaan for saving Nikki is shown and then confronts him.

Further, the MPL caller of the week asks Eijaz if their friends did not understand the meaning of 'Rules are subject to interpretation ' during him doing Naagin dance in the disco night.

Salman says that one group wanted Aly as captain and the other group didn't even fight back after which he takes Kavita's opinion.

Inside the house, Pavitra fights with both Rahul and Kavita.

Salman says that the house got gifts from the contestants but some of them were unlucky cause they didn't get to have their gifts.

Afterwards, Jasmin is seen reading about the task where Aly will get the privilege of depriving two contestants of their gifts by pocketing them in the pool set up in each round.

In the first round, Eijaz willingly gives up his gift after which Jasmin also gives up saying she already has the biggest gift in the form of Aly.

The contestants get emotional unwrapping the gifts.

In round 2, Jaan and Nikki are outed after which Rahul and Pavitra get their gifts along with Aly.

Afterwards, Salman welcomes the entry of Ramola Sikand, Surbhi Jyoti, Mahima Makwana and Monalisa after which they perform a humorous task.

Mahima requests Salman to do a dialogue over dramatic acting.

There is a dance battle between Ramola-Monalisa and Surbhi-Mahima after which they enter the Bigg Boss house.

They give Eijaz and Kavita a task from which the winner will get a message from their close one. Eijaz wins the task.

Up next are Nikki and Rahul from which Nikki wins and gets a blanket sent by her mother.

Salman says that it is good to have goodness and evilness in the Bigg Boss house after which he bids the audience goodbye.

© Copyright tellybest.com, 2020, 2021. All Rights Reserved. Unauthorized use and/or duplication of any material from tellybest.com without written permission is strictly prohibited.
Cached Saved on: Tuesday 15th of June 2021 12:27:41 AM