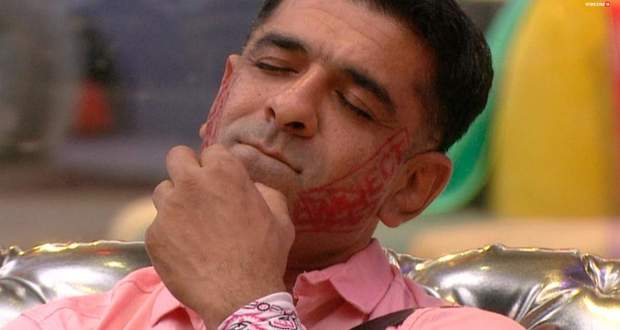 Aly Goni flirts with Jasmin Bhasin and she gets shy. Rubina Dilaik and Abhinav Shukla imitate her and make fun of her.

The chicken sound blares again and Manu tries to wake her up while Eijaz Khan tells them to sort out their problems.

Rahul Mahajan expresses her anger towards Arshi to Eijaz and Manu.

Arshi tries to steal Rahul's items and sparks a fight with Nikki Tamboli and Manu.

Nikki tells Kashmira Shah that she did not like her comment regarding her and Manu which sparks an argument between the two.

Bigg Boss tells them about the nominations task and tells them to select any two people they want to nominate.

Abhinav and Eijaz get into a fight while Bigg Boss says that Arshi, Eijaz, Abhinav, Manu, and Kashmira are being nominated.

Rakhi tells Manu and Nikki to cook up a love story for the audience which makes them laugh.

The next morning, Kashmira asks Nikki if she mentioned something regarding her age in the nomination task which creates another scene that makes Kashmira emotional.

Arshi says that Aly is body-shaming her and the two fight.

Arshi picks a fight with Rakhi by throwing her bottle in the pool.

Rahul Vaidya enters the house which shocks everyone and they feel happy to see him.