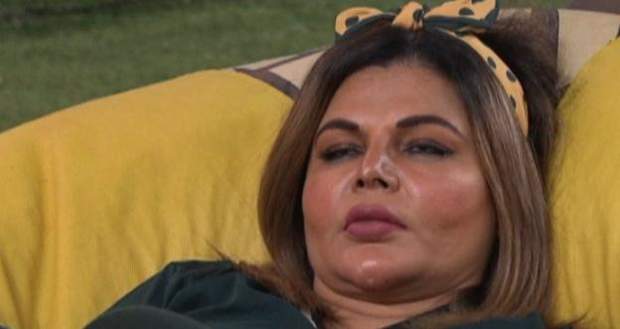 Today's Bigg Boss 14 15 February 2021 episode starts with everyone waking up to the song 'Shake Your Bootiya'.

Rakhi Sawant has an imaginary conversation with Devoleena Bhattacharjee in the kitchen while Rahul Vaidya laughs.

Bigg Boss announces that it is the final week and tells them that they are going to be interviewed by three Radio Jockey's but they will interview only one contestant that they are impressed with and will put their interview on their channel.

RJ Karan comes there and does a rapid-fire interview first.

Rahul wind the rapid-fire round and Karan tells him to sit in the red chair and makes him sing.

Karan asks Rahul if him proposing to Disha Parmar was a publicity stunt while he says that he realised Disha's value by being in the show and proposed to her.

He further asks him whom he would like to keep in touch with after the end of the show.

Karen tells him what he would like to say as he was initially called a coward after coming back to which Rahul replies that it was his weak moment.

Lastly, Rahul is asked whom he sees in the top two while he says that it is a tough tie between him-Aly Goni and him-Rubina Dilaik.

Later, RJ Salil comes while Nikki wins the rapid-fire round and he asks her questions and others two.

Lastly, RJ Ginni comes and starts her rapid-fire round while Aly wins and sits on the red chair.

Ginny asks Aly if Jasmin Bhasin might be in the finale week, in whom place would she be while he takes Rakhi's name.

The housemates do their vote appeal and request the viewers to vote for them.

Rakhi starts irritating everyone by saying that others have sidelined her because she is a supporter.

She further fights with Aly cause he said that he doesn't see her in the finale.