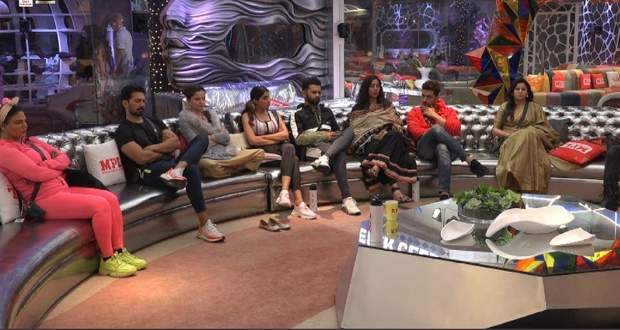 Today's Bigg Boss 14 15 January 2021 episode starts with (Bigg Boss Day 104) Rakhi Sawant commenting on Aly Goni and Sonali Phogat's matter which anger him and he fights with her.

Rakhi speaks into her microphone and asks him if she can use the knife to carve Abhinav Shukla's name on her hand to prove to people that she loves him.

Bigg Boss her into the confession room and tells her to not do anything to harm herself or others which will result in her being evicted from the show.

Later, Rubina Dilaik reads from the Bigg Boss rulebook about the captaincy task named 'Kai Po Che' in which the housemates will have to save their kite's thread from being torn by other housemates.

She also states the rule that only two contestants can leave their kite to damage other's kites.

The task starts and everyone breaks rules and starts tearing other housemates kites.

Sonali splashes water on Arshi Khan's head which angers her and she tells Bigg Boss to call Sonali into the confession room and fights with her.

Later, Bigg Boss berates housemates for not abiding by the rules and announces that there will be no immunity tasks or captaincy task from now on and that they will have to earn their rations from the next week.

Later, Nikki tears Sonali's name and photo stuck in the kite and Sonali calls her a swear word which angers Rubina.

Rubina asks her what type of mother she is to use that word for someone's mother which sparks a fight between them.

Bigg Boss Day 105 starts with everyone waking up to the song 'Tere Mere Beech Mein'.

Rubina reads from the Bigg Boss rulebook about Dabur Dant Rakshak Tikau Task in which Rakhi and Arshi will be toothpaste while other's will be the herbs.

The toothpaste contestant to convince the most members to come into her team will win the task.

Arshi wins the task and gets a don't hamper.

Later, Sonali teases Aly by dancing in front of him.