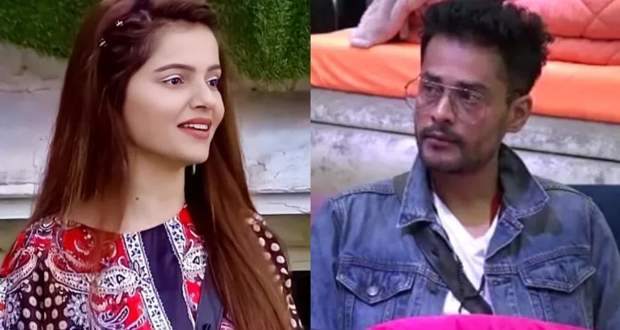 Today's Bigg Boss 14 15 November 2020 episode starts with Salman Khan greeting the audience after which he greets the inmates who are preparing for a Qawwali session.

Salman teases Eijaz Khan and Pavitra Punia for their relationship after which they converse on the topic of nomination.

Both the teams go back and forth and finally Jaan taunts Abhinav Shukla after which Eijaz shows everyone the certificate stating Jaan is the better singer.

Salman praises both Jaan and Rahul for their voice after which he asks Rahul if he got any answer from Disha Parmar or not after which he tells him to bring something from the storage room.

Rahul gets disappointed seeing cans Gulab Jamun and a bowl after which Salman tells him that the response has still not came and tells the contestants that they are Galatfemli Is Gulab Jamun and give it to a contestant of their choice.

Jasmin Bhasin takes Rubina Dilaik's name saying that she has a superiority complex after which Rubina says that she is genuinely hurt by it and they argue.

Salman tells them to stop and goes after which inside the house Aly Goni tells Jasmin that it was not the right time to say it while Abhinav is seen telling Rubina that it may be her tactic to play the game.

Garvit talks about the inmates in the house after which he brings weird gifts for Salman, Harsh and Surbhi.

Afterwards, he does a rap honouring Salman Khan and dances.

They leave to go to the Bigg Boss house but before that Salman gives the inmates a task where two inmates will give to their opinion on how much percent of emotion they are.

First up are Jasmin and Eijaz after which Rubina and Rahul are next.

Salman asks other contestants their opinion on who will be eliminated from Rubina and Shardul.

Salman tells them that they are talking nominations very lightly and that they have to earn their fans.

He tells them that the votes are marginally negligible and announces that Shardul has to be evicted and praises him for being entertaining even when he knew his mother's health was not good.

They give the inmates tasks while Jasmin and Aly have fun throwing water at each other after which Surbhi and Eijaz do naagin dance and they leave the house.

Rubina confronts Jasmin about why she felt her by her hurts after which Salman bids audience goodbye.