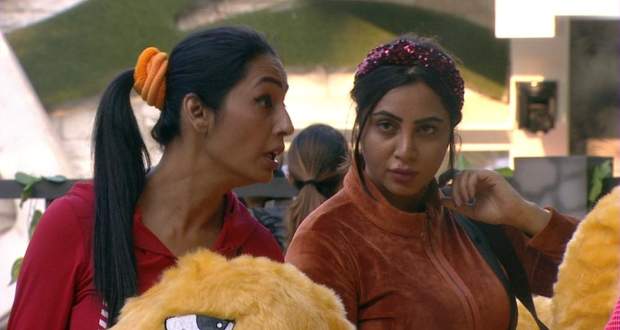 The task will be done in three batches and each winner from the batch will be one step closer to being captains.

In the first batch, Nikki Tamboli, Kashmira Shah, Rakhi Sawant and Arshi Khan will be the ducks while Rubina is the coordinator. Aly Goni volunteers to be the duck feeder.

The round starts and Kashmira, Rakhi and Aarshi target Nikki and disqualify her by making her duck fall.

Nikki starts destroying their ducks and Kashmira gets physical with her after which Rubina disqualifies Kashmira.

Bigg Boss announces to stop the task while Kashmira says that Nikki kicked her in the stomach two times.

Bigg Boss says that wearing the duck suit is necessary by all means and tells them to start the task.

At the end of the task, Rubina makes Rakhi the winner and Arshi address Rubina as biased.

Kashmira addresses Manu Punjabi as Jaan part 2 while Eijaz Khan and Nikki get into a fight.

Arshi tells Rakhi that Nikki talked bad about her to the camera while Jasmin Bhasin revealed to her that Nikki didn't say any of the words Arshi spoke.

Around midnight, Aly, Rakhi, Arshi and Kashmira gossip about Rahul Mahajan and Nikki knowing each other outside of Bigg Boss.

Bigg Boss Day 75 starts with everyone waking up to the song 'Phatela Jab Sil Jayega'.

Rakhi instigates a fight with Nikki by calling her rotten.

Aly fights with Jasmin by telling her that he doesn't like her taking a stand for Nikki.

Upcoming Bigg Boss 14 episode update: Eijaz and Rahul Vaidya to get into an intense argument.