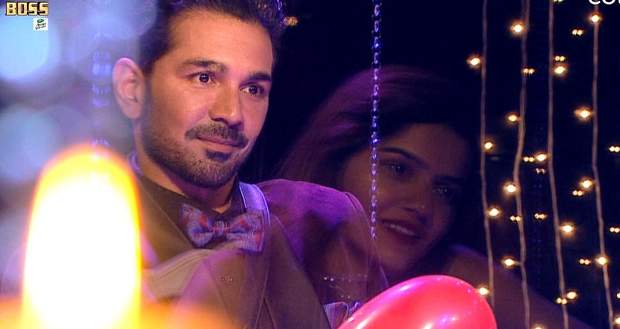 Today's Bigg Boss 14 16 February 2021 episode starts with (Bigg Boss Day 136) Rakhi Sawant requesting to the camera to send her a new coffee jar as the previous one has been spoiled.

She puts the black rose inside the BBMall through a crack and manages to steal a wig.

Aly Goni wears the wig and scares her after which he, Rakhi and Rubina Dilaik dance like maniacs.

Housemates get excited seeing giant teddy bear and chocolates in the BBMall.

Rubina reads from the BiggBoss rulebook about the task in which they will have to choose one person to whom they do not want to get access to the BBMall for the rest of the week and the contestant to have the most balloons on their waistbelt at the end of the task will win.

The task ends and Aly has the most ballons but Nikki bursts his ballons.

However, Bigg Boss announces Aly as the winner and berates Nikki for ruining the task.

Bigg Boss says that Alg has the access to BBMall for the rest of the journey and he goes and hugs the teddy bear.

Bigg Boss tells him that he can share the items from the mall with other housemates while Rakhi begs him to give her coffee.

Nikki is upset while Aly tries to cheer her up by giving her Hershey's kisses.

Later, Bigg Boss praises Rubina and Abhinav Shukla's relationship and it's hardships. He announces that he is going to come there for some time which makes Rubina cry.

Bigg Boss advises the housemates to cook for their date while Rubina gets ready.

Rubina and Abhinav enjoy their date with glass separating them.

He asks her if she would like to marry him again whole she says that they will have a white wedding.

Upcoming Bigg Boss 14 episode update: Housemates get a chance to get their one wish fulfilled.