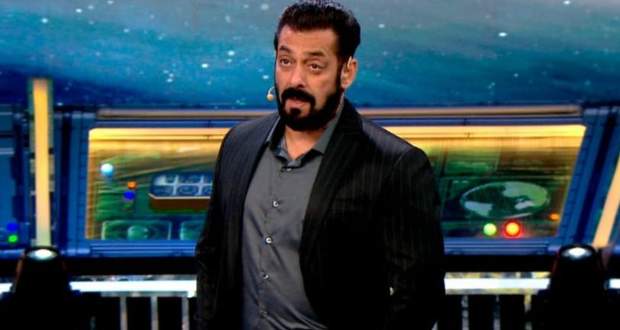 Today's Bigg Boss 14 16 January 2021 episode starts with Salman Khan greets the audience and tells them that today they are going to be the interrogators and not him.

He greets the housemates and asks Rakhi Sawant what does '2 bagh' and '2 Bangla' means while she says that she was just joking.

Salman tells her that the thing was not said in a joking manner or situation and warns her to not cross a certain limit.

Later, he tells says that hardcore fans of the show have asked the housemates questions in Janta Ke Sawal.

Firstly, Ronny Das asks Sonali if her love for Aly Goni is just an act or is it real.

Sonali says that she genuinely likes him while Salman teases her and Aly.

Neha asks Sonali if she is shaken by the news of her being in nomination due to she is doing all sort of absurd things and asks her if she thinks she looks good to the audience.

Salman asks Sonali what word she used while she repeats the word and accuses Rubina Dilaik of using that word for her daughter.

Salman says that Rubina did not use that word but her daughter and that she used that word for Rubina who is someone's daughter.

Nikki Tamboli says that Sonali also threatened of her men seeing them outside.

Salman berates her while she refuses saying such words after which he states the exact words she used.

Salman asks Rahul Vaidya why he didn't stop Sonali's fight from the beginning if he was supporting her.

Shruti Srivastav asks Abhinav Shukla why he doesn't confront those who have wronged him.

Salman tells him that he has a habit of letting go and says that he left Rubina when she needed him the most.

Ruchika Patel and Neha Singh ask Aly why he plans behind Abhinav's back and asks him if he wants to be in his good books.

Aishwariya Mishra asks Aly if he lacks sportsmanship as he makes all the tasks halt that he or his team is about to lose.

© Copyright tellybest.com, 2020, 2021. All Rights Reserved. Unauthorized use and/or duplication of any material from tellybest.com without written permission is strictly prohibited.
Cached Saved on: Tuesday 2nd of March 2021 03:33:20 PMCached Disp on: Friday 5th of March 2021 09:04:22 PM