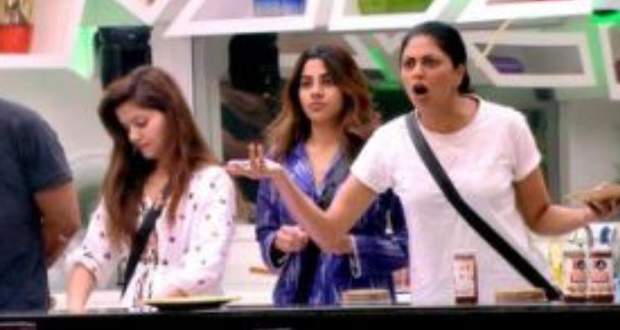 Today's Bigg Boss 14 16 November 2020 episode starts with everyone waking up to the song 'Happy Diwali'.

Pavitra Punia and Nikki Tamboli are seen talking about Eijaz Khan and his tactics while they both say that they are hurt by his actions.

Meanwhile, other contestants are talking about groups while Aly Goni and Kavita Kaushik fight due to her saying that he is in a group with Jasmin Bhasin, Rubina Dilaik, and Abhinav Shukla.

Jasmin tries to console him while he tells him to not interfere.

Japan Kumar Sanu says that their characters are going on while Kavita fights with him saying that at least she has a character.

Further, Kavita and Jasmin are talking while the former says that there was no reason to be so enraged about it.

Kavita gets emotional and says that this house is selfish while Rubina and Rahul Vaidya console her.

Kavita and Nikki are talking while the latter reveals that Aly told the earlier day that there may be a fight between him and Kavita.

Meanwhile, Pavitra is confronting Eijaz while he asks her if she hurt her feelings but she responds by saying that she doesn't have any feelings for him.

Afterward, they are seen trying to clear their misunderstandings.

Rubina is seen telling Abhinav about her confrontation with Jasmin.

Rahul and Nikki talk about their friendship with each other.

Bigg Boss calls Aly into the theatre area and tells him to put up six pictures of the contestants he wants to nominate on the frame while other inmates watch him from a screen.

Bigg Boss tells him to choose one nominated person to be given the privilege to swap one other nominated contestant with a safe inmate and he chooses Abhinav.

Eijaz and Aly are seen talking about Kavita while Pavitra is convincing Abhinav to not choose her name.

Afterward, Eijaz and Pavitra are goofing around while Nikki and Aly fight after which she fights with Jaan.

Eijaz confronts Jasmin while Kavita and Nikki are guessing whom will Abhinav choose.

Bigg Boss asks Abhinav to state their answer after which he saves Rubina and nominates Rahul after which Bigg Boss tells him to choose another contestant for the same and he chooses Jasmin.

Rahul and Pavitra are convincing Jasmin to save them after which she chooses Rahul for the next round.

Further, he chooses to save Pavitra and nominate Rubina after which Pavitra returns the favour and saves him while nominating Jasmin.

Kavita and Jasmin get into a fight again after which Kavita calls her fareb after Aly's presence in Bigg Boss 14.

Upcoming Bigg Boss 14 episode update: housemates to turn against each other in the captaincy task.

© Copyright tellybest.com, 2018, 2019, 2020. All Rights Reserved. Unauthorized use and/or duplication of this material without written permission from tellybest.com is strictly prohibited.
Cached Saved on: Saturday 5th of December 2020 04:21:02 AM