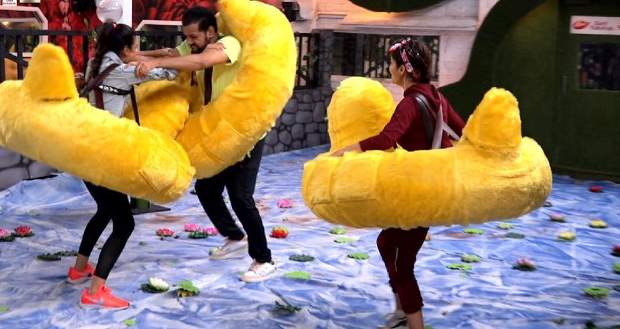 Today's Bigg Boss 14 17 December 2020 episode starts with (Bigg Boss Day 75) Rubina Dilaik reads from the Bigg Boss Rulebook about the second round of captaincy task in which Aly Goni, Abhinav Shukla, Eijaz Khan and Manu Punjabi are ducks while Rakhi will be the coordinator.

Rahul Vaidya comments on Eijaz which sparks an argument with him.

Aly Goni wins the round by a score of 149 while Eijaz says that he is sure he had more collected than him but Aly wins because Abhinav gave some of his collecting to him.

In the third round, Jasmin Bhasin, Rubina and Rahul Mahajan will be the ducks while Eijaz is the coordinator of the round.

Rahul V. is not allowed to participate in the task due to medical reasons.

The round starts and Arshi Khan throws the feedings while Rahul V. enters the ground but Bigg Boss tells him to leave.

Eijaz disqualifies Rubina, Rahul M. and declares Jasmin as the winner of the third round.

Eijaz declares that the nominees for captaincy are Rakhi, Aly and Jasmin.

Further, at night, Nikki is seeking Manu's opinion on whether she should consider Rahul M. or not when Arshi and Rakhi make fun of them which irritated her.

Bigg Boss Day 76 starts with everyone waking up to the song 'Tune Maari Entriyaan.'

Kashmira Shah complains that Nikki is not doing her duty of doing the dishes.

Nikki cleans three dishes and goes away which erupts a fight between everyone.

Arshi threatens to ruin Nikki's makeup while Manu intervenes says she shall not do such a thing.

Arshi kisses Aly on the cheek while Jasmin feels jealous and glares at him.

Rahul V. reads from the Bigg Boss rulebook about the task in which the nominees for the captaincy will be participating.

In the task, the participants will have to go into a cage and will have the hold the snake around their neck while other housemates will feed them snakes.

Rakhi gets scared and backs out of the task and it is revealed that it was a prank played on her.

Upcoming Bigg Boss 14 episode update: Eijaz and Rahul Vaidya to get into an intense argument.