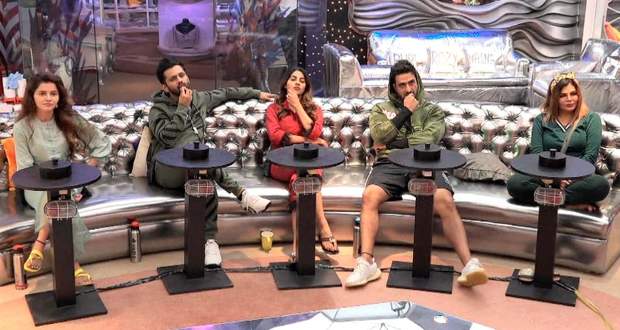 Today's Bigg Boss 14 17 February 2021 episode starts with Rubina Dilaik and Abhinav Shukla dancing to 'Bolna Mahi Bolna' after which he takes his leave.

Bigg Boss Day 137 starts with everyone walking up to the song 'Babuji Zara Dheere Chalo'.

Bigg Boss tells Aly Goni to go to the theatre room and tells him that he has one chance to fulfil one of his wishes.

Bigg Boss tells him to state his wish and their one of the coins kept there into the small water puddle.

He wishes that he gets to video call his mother with his sister's newborn daughter in her lap.

Nikki asks to see her pets while Rahul wishes for a date with Disha Parmar.

Lastly, Rubina asks to have a dance performance with Salman Khan in her traditional wear while Rakhi asks for a pizza.

Rubina reads from the BB rulebook about the task in which they have to manage to get their place in one of the three chairs but they will have to get something done which will be given to them in the task.

Nikki, Aly and Rahul manage to get on the chair.

The first letter comes and it states that Nikki has to convince Rahul to shred Disha's Dupatta into pieces to stay in the chair.

Rahul denies and Nikki says that she understands after which Rakhi takes her place.

Another letter comes and it states that Rubina has do deduct ten lakhs from the amount of money if she wants to get a place in one of the chairs and she denies.

Rakhi says that she has to go to the washroom and tells Rubina to sit on the chair.

Another letter comes and it states that Aly has to sign on the documents declaring that he will give put the trophy if he gets in the top 2 making the other contestant instant winner.

He denies after Nikki manages to convince Rakhi and sits on the chair.

Next letter comes for Rakhi and it states that she has to shred the letter sent by Ritesh to get a chair.

She rips the letter and takes Nikki's place.

© Copyright tellybest.com, 2020, 2021. All Rights Reserved. Unauthorized use and/or duplication of any material from tellybest.com without written permission is strictly prohibited.
Cached Saved on: Tuesday 28th of September 2021 07:21:53 AM