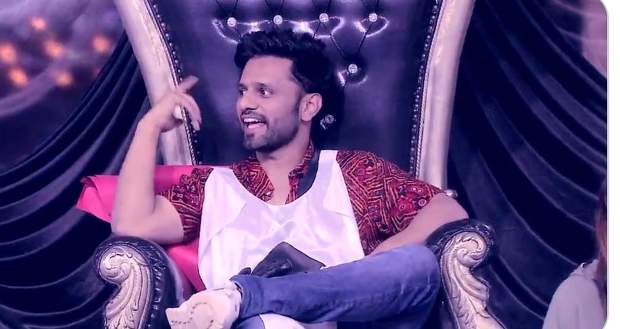 The garden curtain opens and the inmates see the hearts and thrones and they guess what it is for.

Kavita is complaining to Jasmin about the kitchen counter not being cleaned while the latter says that she insulted her and they argue.

During the argument, she calls Aly Goni a 'Gunda' (Gangster) after which Aly fights with her and Jasmin supports him.

Rahul Vaidya tries to calm down Kavita while she says that the inmates have turned this beautiful house into a hell house and the fight again continues.

Kavita shouts to the camera to get her out as she doesn't have anyone of her level inside.

Kavita is cleaning the kitchen counter while Eijaz Khan tells her to step aside as he wants to make eggs but she doesn't move and they get into an argument.

Nikki tries to take Kavita's side but others berate her for it.

Kavita makes a comment at Eijaz after which they fight and she pushes him again and again while others try to separate them.

Eijaz tells Aly to make sure she doesn't touch him again as he is captain while Nikki and Abhinav are trying to convince Kavita to not push Eijaz.

Pavitra Punia tells Kavita to leave Bigg Boss if she isn't interested in the trophy after which she tells the camera she needs an answer.

Bigg Boss announces that upon reviewing the footage of Eijaz-Kavita's fight, it is finalized that Kavita's intention was not of harming him.

Bigg Boss announces that Aly has the privilege to punish the inmate he thinks deemed responsible after which he warns Kavita to not push Eijaz.

Kavita provokes Eijaz using her words and they have a verbal fight.

Rubina Dilaik reads from the Bigg Boss 14 rulebook about the captaincy task 'Ek Tha Raja Ek Thi Rani' in which Rubina is Queen and Rahul is King.

Aly is seen advising everyone how to play in the task while persuading them to side with Rahul.

The task's first-round starts after which Jasmin tries to steal Rubina's money.

Eijaz rips off one of Rubina's heart saying that Pavitra tore one of Rahul's heart.

Abhinav and Rahul fight while the latter calls him 'Sasta Wakeel' (Cheap Lawyer).

Kavita tells the Bigg Boss that she gave most of her money to Nikki as she wanted her to be the captain.

Rahul and Rubina fight for how many of their hearts are valid.

Bigg Boss tells them to discuss together and give a decision on who won this round but they fight instead.

Bigg Boss announces that it is a tie.

Rahul and Abhinav again verbally fight after which the inmates are seen planning to destroy the other team's hearts.

The second round starts in which Abhinav steals Rahul's team's paper and throws it in the pool after which there is chaos.

© Copyright tellybest.com, 2018, 2019, 2020. All Rights Reserved. Unauthorized use and/or duplication of this material without written permission from tellybest.com is strictly prohibited.
Cached Saved on: Saturday 28th of November 2020 09:57:29 PM