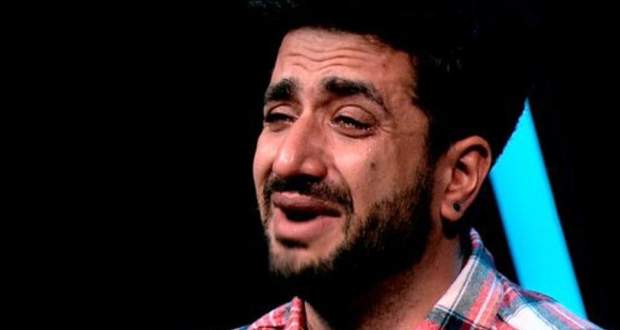 Today's Bigg Boss 14 18 February 2021 episode starts with (Bigg Boss Day 137) Aly Goni reading from the letter that Rahul Vaidya has to convince Nikki Tamboli to accept the 6 lakhs and leave the show.

However, the six lakhs will be deducted from the winning amount and the winner will get thirty lakhs instead of thirty-six lakhs.

Nikki denies after which she and Aly argue on who gets to sit on the chair.

Finally, Aly sits on the chair and suddenly Bigg Boss announces that the task has ended and Aly, Rakhi Sawant and Rubina Dilaik has won the task.

Bigg Boss Day 138 starts with everyone waking up to the song 'Kay Sera Sera'.

Rahul informs Aly that Rakhi too his coffee after which Aly warns her to not take his coffee ever again and leaves.

Bigg Boss announces that Aly had wished to see his sister's newborn baby in his mother's lap and tells them to go to the theatre room.

He cries seeing his mother on a video call and emotionally talks to her.

Rakhi mocks Aly's mother in the bathroom area while others are talking in the garden area.

She comes out and mocks Aly while Rubina tells her to not ruin his happy moment.

Bigg Boss announces that although only the viewers can give Rakhi votes as she wished they can fulfil her wish to eat pizza and tell her to bring the pizzas from the storeroom for her and other housemates.

Further, Rakhi acts as a mother with a baby made of clothes and does drama with Rahul.

Rahul reads from the Bigg Boss rulebook in which the ladies of Bigg Boss are going to be doing a photoshop and will be doing a facial from Lotus white glow facial.

They do the photoshoot and pose in the theatre area.

© Copyright tellybest.com, 2020, 2021. All Rights Reserved. Unauthorized use and/or duplication of any material from tellybest.com without written permission is strictly prohibited.
Cached Saved on: Sunday 9th of May 2021 10:55:12 PM