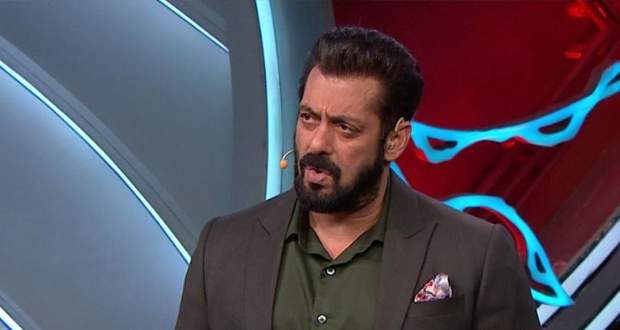 Today's Bigg Boss 14 19 December 2020 episode starts with Salman Khan greeting the audience and says that the people in this house love taking a stand for other people.

A clip of housemates doing a task where they tell who takes the stand for most of the people in the house.

Rubina Dilaik walks away in the middle of the task and others walk away too.

Salman greets the housemates and tells them one by one who takes the stand the most in the house.

Salman praises Nikki Tamboli and Rahul Vaidya as their names were given the most.

Salman teases Aly Goni and Rahul saying that it seems like they are having an affair.

Later, Salman says that Vikas Gupta was the one who took the most stands in the house of Bigg Boss and asks housemates what they would do if they were in his position during his fight with Arshi Khan.

Arshi responds by saying that she was not wrong and reveals Vikas Gupta's personal details which anger Rubina.

Rubina tells Salman that Arshi knew all of Vikas' family matters and taunted him every step of the way on his sexuality which broke Vikas.

Arshi walks away saying she wants to leave the show while Salman says that the main reason for today's talks was that no one stood up for Vikas.

Salman scolds everyone and says that they stand up for unnecessary things like food but sit in silence when it is about major topics like family matters, humiliation, etc.

He says that discipline is absent in the house and that they need to be given doses of it.

Salman tells housemates to give two desired contestants 'Tamiz Ke Shot' who they think need to be disciplined.

Nikki says that Aly laughed while she was getting cursed by Rakhi which hurt her. Aly tries to stand her ground but Salman supports Nikki's statement.

Salman further confronts Rakhi and tells her to keep control of her tongue.