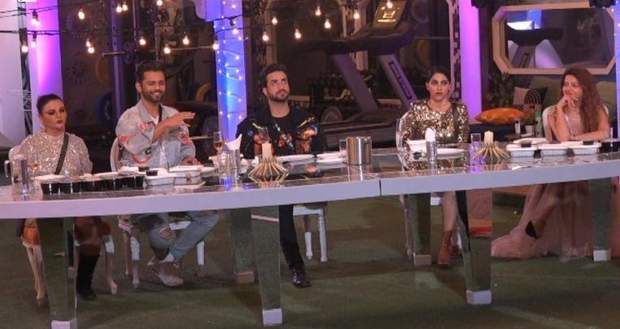 Bigg Boss announces that they are going to have a feast to celebrate the finale week and some guests come for entertaining them.

Later, Nikki Tamboli instigates Rakhi to fight with her by subtly insulting her.

Rahul Vaidya, Aly Goni and Rubina tell her to apologies to Rakhi but Nikki deny it.

Rajkumar Rao enters the house and tells them to state one like and dislike of other housemates.

He announces that two contestants from the previous season 13 will be entering the house very soon and tells them to be ready.

Harsh Limbachiya and Bharti Singh enter the house and entertain the housemates.

Further, they create a team of Blue and Red and start a debate competition.

They tell them that they have special trophies for each contestant and tell them to unveil the cloth with their name one by one.

Rubina gets a scale while Rahul gives the speech for her.

Nikki gets a pendulum while Aly gives her speech.

Rahul gets a small door while Rubina gives her speech.

Aly gets a picture of half face of Rahul and another half of Jasmin while Nikki gives his speech.

Lastly, Rubina gets a drumming toy and she gives her speech herself.

Further, Harsh informs Nikki that they are given the privilege by Bigg Biss that they can double the amount offered to her and can increase the offer of 12 lac to leave the show.

They give the offer to Nikki but she denies after which Bharati asks Rakhi if she would like to take up the offer.

However, she also denies after which Harsh tells Aly to open the briefcase and look at the amount while Aly gets shocked seeing the amount.

However, he laughs showing 'Chal Be Laalchi' written on the briefcase.

Harsh makes them do a task in which the housemates will have to stand in the circle's while they will ask housemates questions regarding the chosen contestant.

Upcoming Bigg Boss 14 episode update: Housemates to have a walkthrough of their journey.