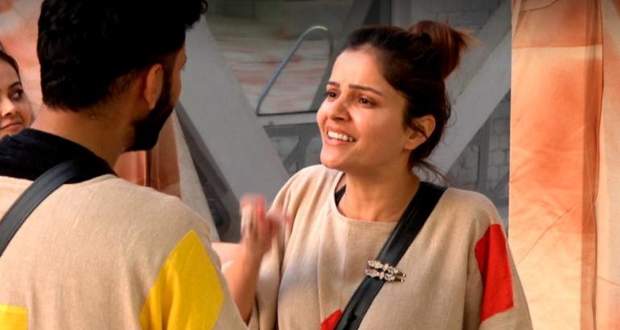 Today's Bigg Boss 14 19 January 2021 episode starts with Arashi Khan asking Vikas Gupta if she looks negative to the outside people.

Further, Rakhi Sawant states that she won't do the dishes if Abhinav Shukla does not do it with her and Arshi volunteers to do it.

Bigg Boss Day 109 starts with everyone waking up to the song 'It's the time to disco'.

Rubina Dilaik reads from the Bigg Boss rulebook about a task named 'locked out' in which everyone will be locked out of the main house and will have to stay in the garden area only while each commodity used will be counted as one unit.

There will be two teams in which the Yellow team will consist of Rahul Vaidya, Aly Goni, Arshi, Nikki Tamboli and Sonali Phogat while the rest will be in the Red team.

Devoleena tries to steal yellow teams survival kit while Rakhi tells Rubina that she peed herself.

Nikki announces that she wants to go inside and Rubina goes with her and write 6 units after coming back.

Rakhi also goes inside while Rahul says that 5 units are done counting undergarments as a single unit which angers Rubina and she says that they are personal hygiene matters and that they should not be counted.

Rahul declines while Rubina says that she will count all the things used as well and removes the unit written beside Nikki's name.

However, Rahul does not let her write the new number which sparks a fight between them.

Bigg Boss announces that there is something for them in the living room.

Some people show them a burger and fries on two plates while Rubina reads 3 units per plate.

Nikki goes inside and eats the burger.

Later, Rahul calls Abhinav a user and says that how can he be loyal to them when he can't even be loyal to his wife.

Rubina argues with him and gets in his face while Abhinav drags her away and fights with Rahul also.

Rahul is going while Rubina pushes him which angers Aly.

© Copyright tellybest.com, 2020, 2021. All Rights Reserved. Unauthorized use and/or duplication of any material from tellybest.com without written permission is strictly prohibited.
Cached Saved on: Tuesday 2nd of March 2021 03:53:02 PM