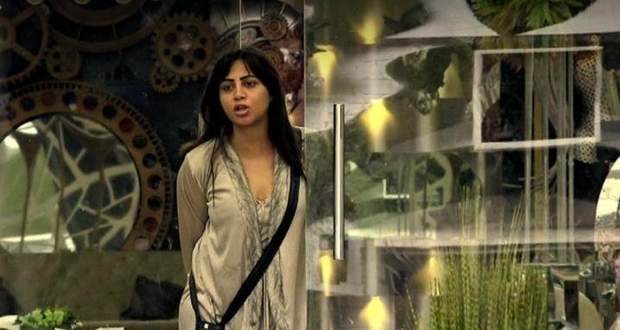 Arshi Khan thinks that Devoleena is indirectly talking about her and fights with her.

Later, Arshi clears the misunderstanding with her but again fights with her while preparing for the dinner.

Devoleena gets angry at her and throws the spatula on the ground but it bounces back and hurts Abhinav Shukla.

Aly and Rahul keep taunting Arshi throughout the day while she dares Aly to rip her stuffed toy, Sheru.

Many of the housemates are talking about Arshi in the garden area while Arshi rants to Rubina Dilaik when suddenly Devoleena shows Arshi the finger and leaves.

Later, Arshi shows Nikki Tamboli a water bottle of Rakhi's with food inside it and she shows it to the everyone.

Rahul says that Arshi was the one who showed creme rolls to Nikki and he fights with her.

Rahul and Aly incite Nikki and Rakhi against Arshi and make them fight.

Arshi justifies herself to Rubina and talk about Nikki while Rakhi cries and takes a creme roll from the dustbin and takes it away.

Bigg Boss announces that it is time for nominations task and tells them that everyone is nominated for elimination as the show is nearing its end.

However, today's task may save one of the housemates from the elimination.

Rubina reads about the task in which they will have to either rip the page making the contestant whose name is in the page eliminated or write a name of their desired contestant they want to be safe from the elimination.

© Copyright tellybest.com, 2020, 2021. All Rights Reserved. Unauthorized use and/or duplication of any material from tellybest.com without written permission is strictly prohibited.
Cached Saved on: Sunday 9th of May 2021 09:20:16 PM