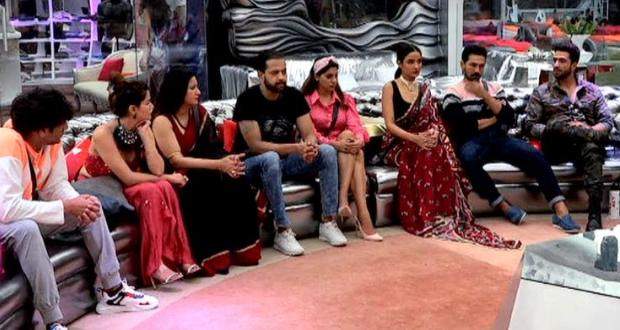 Today's Bigg Boss 14 1 January 2021 episode starts with Jasmin Bhasin commenting that Rakhi is an old player which sparks an argument between the two.

Bigg Boss Day 91 starts with everyone waking up to the song 'Dekho 2000 Zamana Aa Gaya.'

Jasmin tells Arshi Khan and Aly Goni that Rakhi was talking about separating her and Aly in a cryptic code.

Arshi confronts Rakhi in the garden area which initiates a fight between Rakhi and Aly.

Aly requests Jasmin to not come in between their fight as it will damage their relationship.

Bigg Boss says that it is a tradition to make new year resolutions and tells them to make notepad and pens from the storeroom and write their resolution in it.

Vikas Gupta reads from the Bigg Boss rulebook about immunity task in which Arshi and Rakhi will be competing against each other and from the two, who will be able to break most resolutions of housemates will be the winner.

Rahul Mahajan will be the coordinator and Vikas brings the resolution board from the storeroom.

Rakhi says that she made six scores which angers Arshi and she fights with her.

Bigg Boss asks Rahul M. if anyone managed to break the housemate's resolutions.

Rahul M. declares that even though Arshi tried very hard, no one won the task and Bigg Boss says that no one gets the immunity as a result.

Arshi cries in the bedroom while others try to console her but she says that her time will come.

Later, Aly voices his doubts and strategies of the nominations while Rubina Dilaik tells him that housemates will not be comparing contestants but will be nominating all the contestants if given the opportunity as it is near end of the show.

During midnight, some housemates are talking which irritates a sleeping Rubina and she states that she will not do the house chores for a week.

Nikki Tamboli looks for food during midnight and each others part of food too which angers Vikas.

Sonali Phogat again wakes everyone up which sparks a fight between her and other housemates.