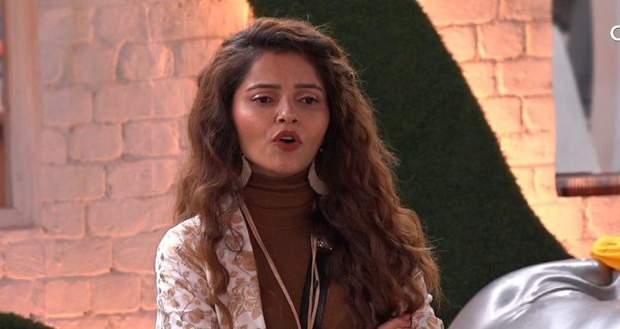 Today's Bigg Boss 14 20 December 2020 episode starts with Salman Khan greeting the audience and saying that housemates forgot the word discipline as soon as he went away.

Inside the BB14 house, Nikki Tamboli tells Aly Goni that she didn't expect him to laugh at her when she was getting insulted by Rakhi Sawant.

Aly says that he was not laughing at her which sparks a fight between the two and Nikki starts crying.

Rubina Dilaik and Jasmin Bhasin tell Aly that Nikki is fond of her and that is why she has certain expectations from him.

Meanwhile, Arshi Khan initiates a fight with Nikki and tells her that the show doesn't run because of her.

Salman gives them a task to choose who is more boring from Jasmin and Abhinav Shukla and cut the picture from the reel who they choose.

MPL caller of the week, Sonu Bagoriya asks Rubina if her trust on Jasmin has become less or not to which she gives a positive response.

Inside the BB 14 house, Jasmin tells Rubina that she is also on the same page and get into an argument while Rahul Vaidya is seen talking with Aly.

Salman welcomes Dhvani Bhanushali and she makes an entry with performing her song 'Nayan'.

Salman congratulates her on getting 1 billion views on her song 'Vaaste'.

Salman greets the housemates once again and Jasmin complains about Rubina to him.

Salman scolds everyone saying that they have changed the meaning of becoming captain as first it was about the title but now it is because of saving someone else.

Salman questions Rubina why she doesn't want to become a captain.

Salman makes a special announcement that Aly is freed from the captain title and makes Rubina the new captain of the task.

Salman says that the immunity will stay with Aly as he has won the task and tells Rubina to received the tasks.

Finally, Salman says that Kashmira Shah is eliminated from the elimination and tells her to come out.

After midnight, Abhinav, Manu and others prank Rakhi Sawant which makes Rubina angry and she tells him to sleep somewhere else.