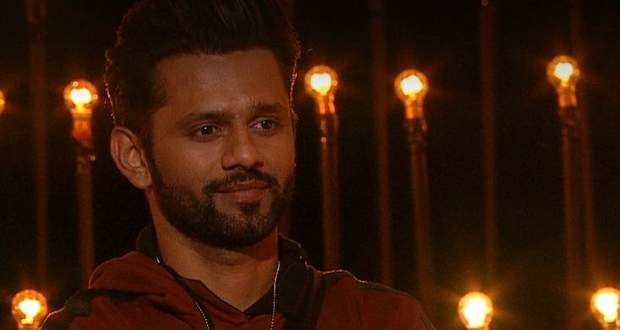 On Bigg Boss Day 140, Rakhi Sawant talks about the housemates while they ignore her.

Rahul Vaidya is standing on a podium while Bigg Boss says that he overcame loneliness in the house of Bigg Boss and shows his journey in the show on a big screen.

Later, Rakhi comes and Bigg Boss praises her saying that she is the one who mads Bigg Boss a household name.

Further, she watches her journey in the house on the big screen and gets emotional.

Rakhi shows her gratitude to Bigg Boss and cries after coming outside while the housemates console her.

Later, Aly Goni is next and he gets emotional seeing his journey with Jasmin Bhasin in the house of Bigg Boss 14.

Further, Rubina Dilaik is next and she gets emotional seeing her fights with the housemates and her up and downs with Abhinav Shukla.

She breaks down seeing the clip of her confession about the divorce.

She cries seeing how she and Jasmin turned from friends into enemies and then into strangers.

She laughs seeing her dances with the family and the romantic moments Abhinav.

The slideshow ends with Rubina in her Shakti avatar while Bigg Boss tells her that the journey she experienced is one with her self and not with Bigg Boss.

Rubina shows her gratitude to the Bogg Boss and goes while Nikki Tamboli comes in lastly.

Bigg Boss tells her that although she was not as big as other contestants initially, she showed the spark and enthusiasm to win the show by doing all that she can.

She laughs seeing her moments with Jaan Kumar Sanu and feels bad hearing the words she used to insult him.

She smiles seeing her friendship forming with Rubina and again cries seeing her mother coming to meet her on the family week.

Tomorrow will be the Finale episode. Hope the last and final episode of Bigg Boss season 14 will be more exciting.

© Copyright tellybest.com, 2022, 2023. All Rights Reserved. Unauthorized use and/or duplication of any material from tellybest.com without written permission is strictly prohibited.
Cached Saved on: Tuesday 22nd of November 2022 11:42:10 AMCached Disp on: Tuesday 6th of December 2022 12:46:26 PM