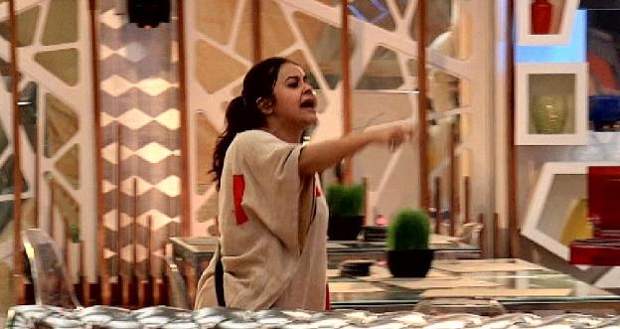 Devoleena Bhattacharjee goes inside saying that she wants to have coffee and tells the cameras that she is doing it from Eijaz Khan's perspective.

Rubina and Vikas Gupta fight with her.

Nikki Tamboli goes inside and purposefully sits on every corner of the house to make Red team win.

Devoleena tells Rubina that Rakhi Sawant wants to go inside so they have to get out of the house.

Nikki purposefully goes to the bedroom while Rubian lies to the housemates that Nikki says she wants to do her makeup and would take time.

Devoleena says that she will go inside if Nikki doesn't come put in two minutes.

She gets emotional while Nikki says that she is fake and also gained sympathy by faking MeToo experience.

Devoleena goes inside and argues with Nikki.

Bigg Boss tells everyone to immediately make a row in the garden area.

Housemates are informed that due to the Red team having lesser units, they are allowed to use the bedroom area while the Yellow team will have to sleep in their sleeping bag.

Bigg Boss Day 110 starts with everyone waking up to the song 'Dil Laga Na'.

Devoleena tells Rahul that she will be with Rubina cause she doesn't want Nikki to have any privileges.

The task recontinues and Vikas says that he wants to go inside to sleep and goes inside.

Rubina orders Vikas to get out of the house.

Two men come and put pastries with a note saying 5 units per pastry.

All the housemate's corner around the door while Rubina tries to manage how each person gets the pastry.

Meanwhile, Rahul and Vikas are still inside the house when suddenly Nikki goes inside and takes a pastry and others all go inside.

© Copyright tellybest.com, 2020, 2021. All Rights Reserved. Unauthorized use and/or duplication of any material from tellybest.com without written permission is strictly prohibited.
Cached Saved on: Tuesday 9th of March 2021 02:57:14 AM