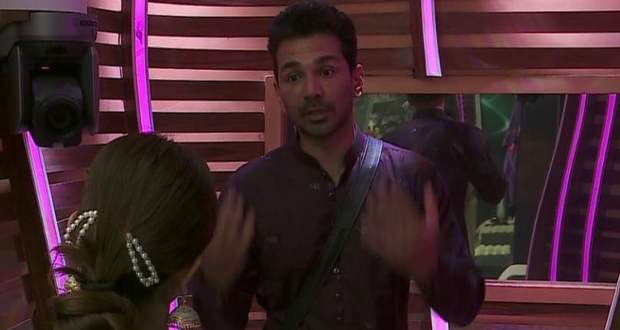 Today's Bigg Boss 14 20 November 2020 episode (continuation of Day 48) starts with Pavitra Punia telling her side of the story with Eijaz Khan to Rahul Vaidya.

Jasmin Bhasin's box lifts a little as she is crawling to the other side.

Nikki Tamboli tells about it to Kavita Kaushik.

Bigg Boss announces that the task might go on through the night and thus Pavitra and Rahul are both coordinators so one can keep an eye while the others sleep.

Pavitra puts a bug in Jasmin's box after which they have a verbal spat.

Afterward, Pavitra lifts Kavita's box to check on her and finds her sleeping after which she pours water into her box to wake her up.

Nikki reads from the rulebook to Pavitra about the rule of lifting boxes.

Aly Goni discusses the situation with Rahul who sides with Aly and Nikki.

Big Boss 14 Day 49 starts with everyone waking up to the song 'Kamali'.

Rahul and Kavita get into a verbal fight while Kavita calls her an imposter.

Rahul tells Abhinav to not come close to him.

Abhinav talks to Rubina and calls Rahul a crybaby.

Rahul tells Kavita and Jasmin to make a deal and put each other out of their misery.

Rubina tells Abhinav that she wants to speed up things and makes a plan to talk to each inmate and convince them to not fight with or taunt Kavita as she doesn't want to become the captain but just doesn't want to be taunted.

Jasmin agrees to it while Abhinav walks away.

Abhinav tells Rubina that he doesn't wanna be a part of her plan due to which they get into a fight.

Nikki asks Abhinav his preference to which he replies with Jasmin after which they talk about Jasmin's box lifting a little.

Rubina tries to convince Kavita but the latter refuses saying that she wants to be a captain.

Rahul tells Aly that Kavita is the value winner as per the rules after which he tells the same to Jasmin.

Jasmin gets emotional while Rubina says that if Rahul wanted to be fair, then why to drag on for sixteen hours.

Abinav tells Rubina to not interfere in that matter.

Jaan tells Rahul to announce while Aly intervenes that he should have announced when it happened.

Aly and Pavitra get into an intense argument.

Bigg Boss announces that the task was about inmates using their power to make their desired inmate next captain after which he asks Rahul to give his decision.

He announces that Kavita is the winner technically due to which Rubina fights with him.

Abhinav and Rubina tell Aly that he shout has spoken up for Jamin against Rahul.

Eijaz, Nikki, Pavitra, Rahul win the task and get a hamper from 'Mamaearth' after which the other inmates massage their heads.

Nikki and Jaan are seen conversing with each other through hand gestures.