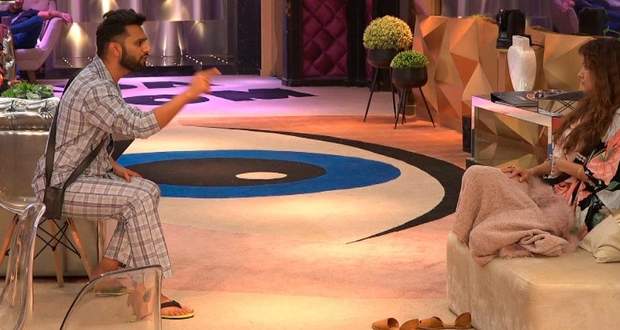 Today's Bigg Boss 14 21 December 2020 episode starts with (Bigg Boss Day 79) starts with everyone waking up to the song Goli Maar.

Rubina Dilaik redistributes duties while Eijaz Khan sparks an argument with her.

Nikki Tamboli confronts Rahul Vaidya about him being distant from her and starts crying.

Bigg Boss announces that it is time for the nomination task and tells Rubina that she has a special privilege to chose one contestant she wants to put in the nominations.

She chooses Eijaz and he goes straight to eliminations for this week.

In the task, the contestants will have to choose 2 other contestants they want to put in nominations and shoot paintballs at them.

Rahul V. confronts Rubina about why he nominated her and Abhinav which sparks an intense argument between the two.

Rubina brings up the Shark Attack incident and drags Jasmin Bhasin, Aly Goni, and Abhinav into the fight.

Rubina starts fighting with Jasmin with the accusation that she targeted Abhinav in the task as he was sick.

Abhinav tells Rubina that she should clear out her misunderstandings with Jasmin away from other contestants with shocks her.

The chicken sounds buzzes and Rubina comes to the bedroom area where Rahul M. says that the buzzer was because of Arshi and that he and Eijaz are not well.

Rakhi Sawant asks Aly what he would do if his parents do not accept Jasmin which makes Jasmin emotional and she starts crying.

Bigg Boss announces that Manu's bad health condition requires him to do some tests and get out of the house for a short period.

Bigg Boss tells him to come out through the confession room and says that he is safe from evictions this week.