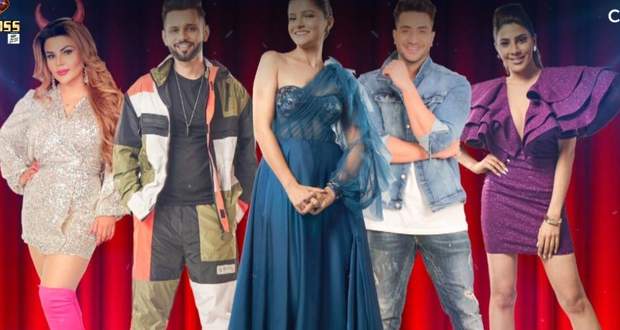 Salman tells the audience that there will be live voting for some time in the soon coming future and tells them to be prepared.

Salman shows clips of housemate's entry and reentry, property damage, and fights in the name of Makers, Content etc.

He talks about love and shows the proposal and lovely moments in the Bigg Boss house.

He introduces the finalist's family members and says that contestants are waiting for the winner's declaration and shows inside the house.

Bigg Boss announces to the final day housemates that their long journey ends tonight and says that it is time to celebrate.

They remove the cloth to reveal champagne.

Later, Salman tells them that he is going to hand over the baton of entertainment to Madhuri Dixit as her show Dance Dewaane 3 will take the place of Bigg Boss on weekends.

He video calls Madhuri and requests her to do the contestant's introduction while she happily complies.

He asks the last episode housemates what they learned from their journey and introduces them to the ex-contestants and the family members.

Rakhi does a performance on Pardesiya and other songs after which Salman praises her and says that she has come from the first season and is the only contestant to be in the finale.

He further tells Rakhi that her long desire of Ritesh coming to meet him has been fulfilled and that he has come inside the house.

However, actor Ritesh Deshmukh comes there entertaining everybody while he asks Salman why he is there.

Ritesh tells Rakhi that he will say the housemates some questions on her behalf and will support her.

Rakhi and Nikki Tamboli press the buzzer while Rakhi is the faster one and goes on the setup with Ritesh.

Salman on the grand finale asks her if she thinks she got high votes than others and she predicts negatively while Salman reveals that she is correct.

Salman asks them what is the one moment of their journey of Bigg Boss that they would like to change.

Salman says that the second person to be evicted is Aly Goni shocking everyone while no one believes it.

Nikki starts crying as Aly leaves saying she can't believe that she has so many fans and their support.

Salman asks Aly who doesn't deserve to be in there while Aly replies that it is obviously Nikki.

Nora Fatehi makes her entry by dancing to her famous songs like 'Chhor Denge', 'Saki Saki' and others.

Nora compliments Rakhi saying that she is a smart girl and greets the housemates.

She says that she has three wishes and they are in order of Eijaz Khan giving her a rose, Dancing with Sonali Phogat, and dancing with Salman.

Dharmesh and Tushar enter after which they dance with Salman and Sonali in pair.

DD3 contestant, Sohil comes and makes all the gents dance with him.

Further, Dharmendra Singh graces the stage and dances with Salman.

Salman points out the couples while Dharmendra gives them love advice.

As Bigg Boss 14 live updates continue, a performance of Aly, Nikki, and Rahul Vaidya is shown after which Dharmendra leaves wishing the housemates the best of luck.

Further, the stars of the upcoming show, Udaariyaan, and Bawara Dil give their performance with the other stars of serials of Colors TV.

Bigg Boss 14 live updates will be streaming on voot.com and colors tv as well.