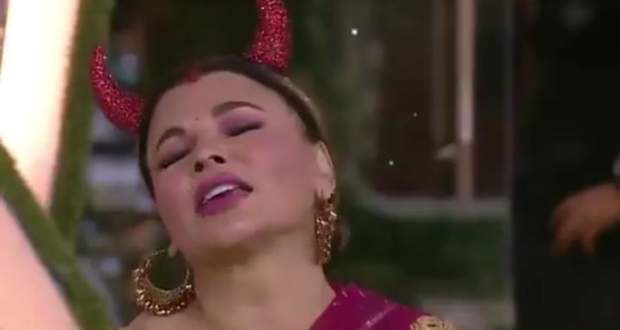 Today's Bigg Boss 14 21 January 2021 episode starts with Nikki Tamboli refusing to come out of the main house while Rahul Vaidya tells Vikas Gupta to come outside as she is a nuisance and won't budge.

Many of the housemates realise questions at her while Abhinav Shukla and Rubina Dilaik support her.

People come inside and they drink coffee while they upturn the tray where it is written that they will get a personalised coffee until the end of their journey for 100 units.

Rakhi goes inside and accepts the offer.

Bigg Boss tells them to form a line in the garden area while Nikki goes inside.

Rubina writes 20 points for Nikki which creates a ruckus between housemates.

Bigg Boss asks them for results and they can't agree

As a result, Bigg Boss says that the task is halted.

Bigg Boss Day 111 starts with everyone waking up to the song 'Halkat Jawani'.

Nikki tells Abhinav to give her coffee from Rakhi's jar and he tells her to ask Rakhi in front of him once.

Vikas advises Rakhi on giving up her items to look well to others.

Later, Rakhi gives a sip of her coffee to Aly and Devoleena.

Bigg Boss berates Rakhi and tells her to put back the coffee jar in the storage room and punishes her that the supply has been taken away from her and she won't be getting coffee anymore.

Rubina reads from the Bigg Boss rulebook about an exclusive live task named 'Press for entertain' in which the two housemates names will be called and the person to press the buzzer first will get a chance to go live on voot for one hour.

The contestant to get the most votes will be allowed to get 5 of their desired things from the BBMall.

In the first round, Aly and Vikas are called and Vikas presses the buzzer first while Nikki is the coordinator for this round.

In the second round, Arshi and Sonali Phogat are called while Vikas is the coordinator for this round.

Sonali removes Arshi's hand and presses the buzzer and Arshi fights with her saying she shouldn't have touched her hand.

© Copyright tellybest.com, 2020, 2021. All Rights Reserved. Unauthorized use and/or duplication of any material from tellybest.com without written permission is strictly prohibited.
Cached Saved on: Tuesday 2nd of March 2021 12:57:43 PM