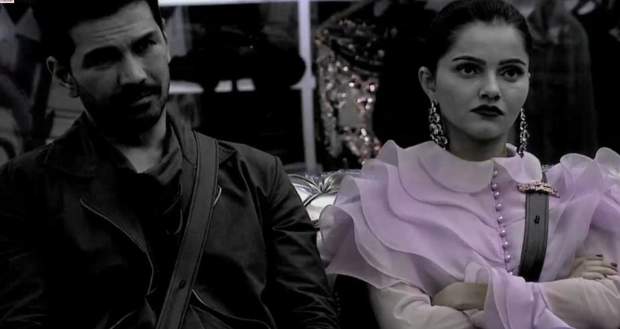 Today's Bigg Boss 14 21 November 2020 episode starts with the entry scene of Ekta Kapoor holding a big diamond in her hand with a screen in front of her.

Inmates wake up to the song 'Oh La La'.

Ekta says that only inmates have the power to create their own story in front of the audience after which she says that it is time to meet the Dabang of Bigg Boss.

Salman Khan greets the audience and reminds them that half of this season of Bigg Boss is over but the other house is still left.

He says that friendship keeps changing in the Bigg Boss house after which inmates are seen saying one person's name and stating their reason for thinking why they are selfish friends.

Aly Goni and Kavita Kaushik get into an argument while Kavita calls him a 'Smalltown Gunda'.

Salman greets the inmates and says that Aly, Pavitra Punia, Jaan Kumar Sanu, and Abhinav Shukla are the ones who make friends as per their convenience.

Salman asks Aly who are his priority after which he asks the inmates if he is in a group with Abhinav, Rubina Dilaik, and Jasmin Bhasin.

Salman tells him that he is showing himself as confused when he chose Abhinav in the nominations task.

He pulls Jasmin's leg and teases her after which he informs her that she is safe from this week's eliminations.

Afterward, he asks Pavitra what are her two priorities in this house.

Salman says that he would like to speak to Abhisekh whose wife accidentally calls him Abhinav.

He tells that he is saving himself and putting his wife, Rubina in the nominations.

He tells him that he's making himself look bad and Rubina weak by begging other inmates to save her.

He says that in the future, people in Bigg Boss will learn convenient friendship tactics from Jaan.

Salman asks other inmates their opinion on Jaan's friendship.

He tells Jaan that if he gets eliminated it is Aly's fault and not Eijaz Khan's.

Inside the house, Eijaz and Jaan get into an argument.

Salman says that they might not be able to see true friendship in this season.

MPL caller of the week, Bhavna asks Rahul if he got the answer from Disha Parmar to which he says that if she comments on Disha's pictures then she might answer.

Bhavna asks Rubina why did she back out of allying with Eijaz due to Abhinav's advice.

Salman says that he will call out two names who will become safe from this week's nominations.

Salman reveals that Kavita and Nikki Tamboli are safe after which Rubina, Jaan, and Eijaz are left to be nominated for eliminations.

Salman introduces Ekta Kapoor to the audience after which a clip of her telling the inmates about the Immunity Stone which is her version of Naagmani which they can use any week of the season is shown.

She says that they will have to impress her through tasks and the first task is 'Badle Ki Chunauti'.

© Copyright tellybest.com, 2020, 2021. All Rights Reserved. Unauthorized use and/or duplication of any material from tellybest.com without written permission is strictly prohibited.
Cached Saved on: Sunday 9th of May 2021 10:04:51 PM