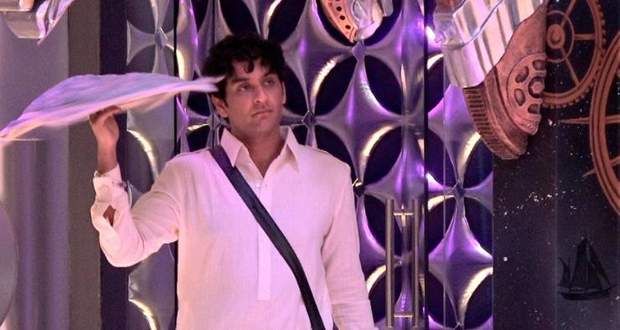 Today's Bigg Boss 14 22 December 2020 episode starts with Bigg Boss greeting Vikas Gupta in the confession room and warning him to not do the violence again due to which he got out of the Bigg Boss house earlier.

Vikas enters the house and everyone gets surprised to see him.

Rakhi Sawant and Nikki Tamboli are talking about Aly Goni and Jasmin Bhasin's relationship and Rakhi says that they are very serious and Nikki doesn't believe her.

Bigg Boss Day 81 starts with everyone waking up to the song Befikaree.

Aly says that he will not leave Rubina Dilaik as she took his captaincy.

Arshi Khan goes to sleep and tells Aly and Rahul Vaidya to tells Rubina that she has back pain.

The song 'Dhakad' suddenly starts blaring and Sonali Phogat came inside while Bigg Boss tells others to welcome her as a new contestant of Bigg Boss 14.

Rubina reads from the Bigg Boss rulebook about the captaincy task 'Hot Air Balloon' in which they will have to get one personal item of the person they want out of the task in the bag with cotton and put it on the hot air balloon.

One contestant will be chosen for each round who will get to put their desired bag in the swimming pool and the contestant whose name is on the bag will be out of the task.

Jasmin is chosen to be the decider for the first round and she throws the bag with Eijaz's name in the swimming pool making him the first person out of the task.

Eijaz requests Rahul V. to not bring up the topic of touch telling him the nightmares he had about it and he complies.

Eijaz is chosen to be the decider for the second round and he throws the bag with Rubina's name in the swimming pool.

In the fourth round, Abhinav Shukla becomes the decider while Aly and Vikas get into a fight.

© Copyright tellybest.com, 2020, 2021. All Rights Reserved. Unauthorized use and/or duplication of any material from tellybest.com without written permission is strictly prohibited.
Cached Saved on: Thursday 28th of January 2021 02:04:24 PM