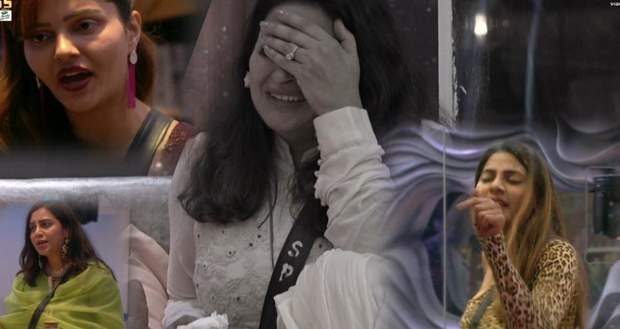 Today's Bigg Boss 14 22 January 2021 episode starts with (Bigg Boss Day 111) Arshi Khan making a scene out of Sonali Phogat touching her hand while Vikas Gupta keeps telling them to stand on the podium.

The buzzer sounds and Arshi presses the buzzer winning the round.

Arshi entertains the housemates why teasing Rakhi Sawant that she will steal her husband.

In the next round, Rakhi wins the round between her and Abhinav Shukla.

Rakhi goes into her Julie form and entertains everyone.

In the next round, Rakhi is the coordinator while Rubina Dilaik wins the round between her and Rahul Vaidya.

Robin's says that she is coming up blank while Abhinav keeps telling her to not say it.

Sonali says that she wants to eat Chapati while Arshi tells her to take all the housemate's permission to use the flour.

In the last round, Nikki Tamboli wins between her and Devoleena Bhattacharjee.

Elsewhere, Arshi is telling Aly Goni that Sonali made a single Chapati from a dough of two Chapati's which angers Sonali and she throws the remaining Chapati in the dustbin and cries in the bedroom area.

Vikas convinces Arshi to apologize to Sonali and she goes to apologise to her but stops and turns back when she hears that Sonali threw her leftover Chapati in the dustbin.

Sonali shouts to the camera that she wants to go home and tells the Bigg Boss to send her home.

Rubina brings out the Chapati from the dustbin and tells her that there is no hair in the Chapati which sparks a fight between Sonali and Rubina, Abhinav.

Bigg Bods announces that the viewers found Rubina and Rakhi to be the most entertaining and tells them to get their five desired items from the BBMall.

Bigg tells the housemates that they can take five items from the BBMall on a loan.

Bigg Boss Day 112 starts with everyone waking up to the song 'Dil Dance Maare'.

Sonali says to give her Parantha's to Rubina which create an argument between the two.

© Copyright tellybest.com, 2020, 2021. All Rights Reserved. Unauthorized use and/or duplication of any material from tellybest.com without written permission is strictly prohibited.
Cached Saved on: Tuesday 2nd of March 2021 12:43:37 PM