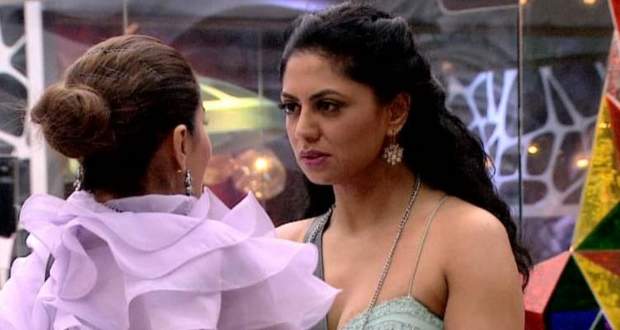 Today's Bigg Boss 14 22 November 2020 episode starts with Ekta Kapoor introducing herself to the viewers after which a clip of the first task done yesterday was shown.

She says that no one can estimate their time in the Bigg Boss house except the housemates themselves.

The housemates are seen doing a task where they estimate how long will other contestants stay in the Bigg Boss house.

Ekta is disappointed by Kavita Kaushik agreeing with others that she will exit in week 7 of Bigg Boss house stay.

Salman Khan greets the audience and reminds them that Rubina Dilaik, Eijaz Khan, and Jaan Kumar Sanu are nominated while Ekta has given contestants tasks to win the immunity stone.

Salman and Ekta greet the housemates and Salman asks her what she thinks of contestants.

She further gives them their third task to mimic the contestants they are given while Rahul Vaidya brings the props from the storeroom.

After the task ends, Ekta says that only two shortlisted housemates will have a chance to win the immunity stone.

Ekta reveals Nikki Tamboli and Rubina as the shortlisted contestants after which she confronts both of them one by one inside the house.

She once again comes to the set after which Rubina and Kavita bring the immunity stone from the storeroom.

Ekta reveals Rubina as the winner and she takes the immunity stone.

They pull Ekta and Salman's leg and Ekta makes them do Naagin dance after which they leave.

Salman greets the housemates and asks Rubina if she wants to celebrate for getting an immunity stone after which Darshan Rawal and Heli Daaruwala enter the house.

Salman pulls Eijaz's leg telling him to not cry after Pavitra Punia.

Darshan makes them do a task of verbal dangal.

Salman comes to the topic of eliminations and then tells Kavita to put a red x on the contestants and state why they are not her competition.

Jasmin Bhasin mimics Kavita and takes her own stand while Salman praises him for it.

Salman again comes to the topic of elimination and reveals that Rubina has gotten the lowest votes and clarifies that the immunity stone can be used in nominations and not in eliminations.

Salman tells the audience that she is safe but had to do it to make her understand.

Salman reveals that Jaan is the eliminated one and tells him to go out singing.

The housemates get emotional after his departure especially Nikki.

Afterward, Aly Goni is seen telling others that he has found out Kavita's trigger point and that is his laugh.

Aly tells Jasmin that she is getting influenced by Rubina and is acting like her due to which they get into an argument.