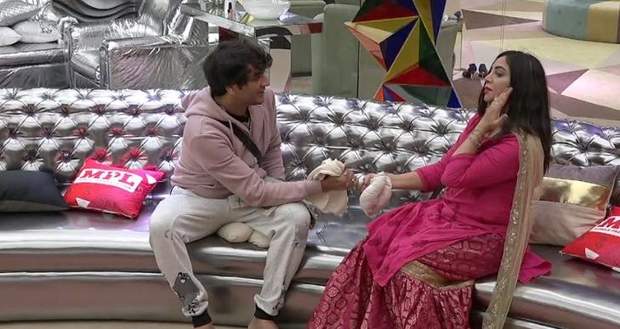 Rakhi Sawant becomes the next decider and she throws Abhinav Shukla's bag in the pool with the reason that he's a strong competitor.

Aly initiates a fight with Abhinav confronting him as to why is targeting Rahul Vaidya.

Bigg Boss announces that the task is over for the day and will continue tomorrow.

Later, Rubina Dilaik and Abhinav instigate Rakhi against Rahul V. and his team.

Rahul V. talks with Nikki and she goes outside while Arshi Khan tells him to not get used by her like last time.

Rakhi goes and gossips about it to Nikki who later confronts him about it.

Rahul Mahajan advises Eijaz Khan and Arshi to flip at the end of the task to make it interesting.

Bigg Boss Day 82 starts with everyone walking up to the song 'Lift Kara De'.

Rakhi is told by Eijaz and Aly that she is rumoured as two-faced which angers her.

Rubina reads from the Bigg Boss rulebook that the period for the captaincy task is going to start in a while and the decider will get to remove two contestants instead of one.

Arshi says that she feels like something wrong is going to happen.

Bigg Boss announces that Vikas is the decider for the next round.

Rahul M. tries to snatch the bag from Sonali Phogat who resists him and everyone cheers her up.

The round starts and Vikas puts Nikki and Rahul M.'s bag in the pool.

Nikki becomes the next decider and she drops his bag to save herself by making a deal.

Upcoming Bigg Boss 14 episode update:  Arshi Khan to flip at the end of the task and make Vikas winner.