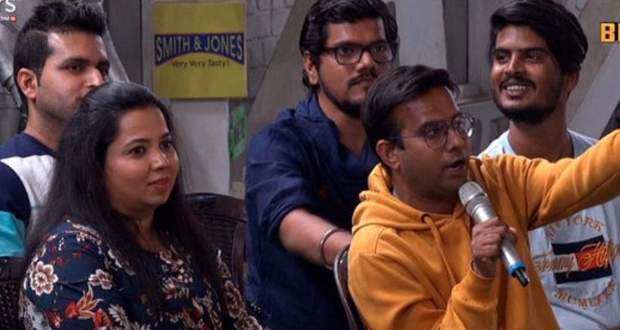 Today's Bigg Boss 14 23 January 2021 episode starts with Housemates doing a task in which they have to decide together which contestant gets the biggest picture on the front page of papers and decide everyone's number from one to eight.

Housemates fight and can't agree with others while the Bigg Boss announces that the time for the task is over and tells them to put the board in the storage room.

Later, Kamya Punjabi introduces all the housemates to the press.

Kamya questions the housemates why the task wasn't done completely as the board is not complete.

She first asks Rubina Dilaik and Rahul Vaidya to go to the hot seat where he is first asked why he is being seen only fighting with Rubina.

Another reporter asks Rahul why he criticises Rubina but ignored Alg Goni's bullying.

Rahul is asked why he brings Rubina's personal matters into tasks which sparks an argument.

Rubina is asked why she ignores that Nikki Tamboli uses her as a shield ever since she came back.

Nikki is seated on the hot seat and is instantly asked why she thinks that she has the license to be insulting just because she's young.

Next, Rakhi Sawant comes on the hot seat and is asked why is she in headlines regarding only marriage.

Eijaz Khan especially comes to answer the reporters through video call after which Devoleena is the next contestant to be seated on the hot seat.

The reporter asks Arshi Khan why she always targets Vikas.

Another reporter asks Vikas Gupta why he always reveals the outside matters to the contestants even though it is a rule to not speak about it.

Sonali Phogat comes next and is asked why she threw away the food that Bigg Boss has just punished the whole house for.

Lastly, Abhinav Shukla and Aly come on the hot seat and get questioned by the reporters.

Bigg Boss says that it's time for them to leave.

Vikas argues with Arshi who tells him to scold her in the luggage room.

Rakhi tells them to fight in front of her while Arshi declines while creates a ruckus.