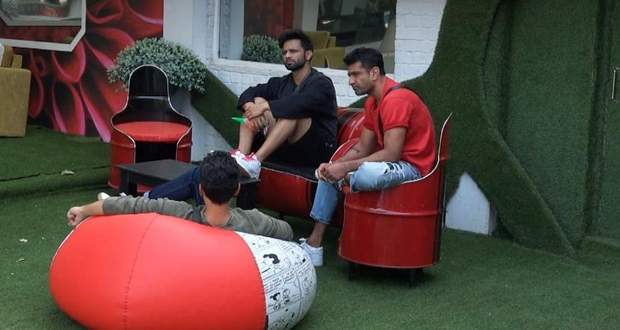 Nikki Tamboli is telling Pavitra Punia that now they will have to keep their priorities in check.

Pavitra tells Kavita Kaushik about her engagement that broke off.

Kavita is talking about Eijaz Khan to Nikki and Pavitra.

Around midnight, Eijaz steals Nikki's coffee jar while Aly Goni and Rahul Vaidya are watching him.

Eijaz and Aly steal one can from the Appy Fizz mini-refrigerator meant only for the use of captain after which Rahul throws it away.

Big Boss 14 day 52 starts with everyone waking up to the song 'Khula Hai Mera Pinjara'.

Kavita tells Nikki that Rubina has made Abhinav weak.

Rubina Dilaik is called into the confession room where Bigg Boss asks her if she wants to use her immunity stone in this weeks nomination task to which she refuses.

Bigg Boss announces that it is time for this weeks nomination task and everyone is unsafe except Kavita as she is the captain.

Eijaz reads from the Bigg Boss 14 Rulebook of nomination task in which contestants will be given one parrot with one contestant and they will have to decide if they want to nominate them or not.

However, only the first six contestants to reach the red box after the buzzer sounds will be allowed to nominate.

Jasmin says that if she had a choice, then she would have nominated Pavitra as she bad-mouthed Gauahar Khan while Kavita and Nikki side with Pavitra.

Eijaz, Rahul and Abhinav argue as they can't agree to save each other.

Pavitra is the first to get inside the theatre area and she nominates Jasmin.

Kavita tells Nikki to not be shocked if she takes someone else's name if she gets the power to save someone.

Eijaz and Rahul get into an argument.

Rahul is the second to go inside the theatre area and he nominates Eijaz.

Kavita tells Eijaz to be the sixth contestant to go inside as Nikki and Jasmin have taken oaths to not nominate each other but he refuses saying that he is not revengeful.

Kavita makes a deal with him that if she gets to save a contestant then she will save him after which he agrees.

Rubina goes forth and nominates Pavitra.

Aly asks Eijaz if he will go in to which he agrees after which they go to Kavita who says that she will save Eijaz if she gets the chance.

He tells Kavita to save one nominated contestant and put either Nikki or Aly in their place.

Kavita saves Eijaz and puts Aly in her place.

Jasmin and Aly say that they will make anyone captain except Kavita.

Kavita and Rahul get into an argument during which she tells him to become Jaan Kumar Sanu's replacement.

Aly and Abhinav steal one can of Appy Fizz from the mini-fridge after which they along with Jasmin and Rubina drink it.

© Copyright tellybest.com, 2020, 2021. All Rights Reserved. Unauthorized use and/or duplication of any material from tellybest.com without written permission is strictly prohibited.
Cached Saved on: Sunday 17th of January 2021 05:54:28 AM