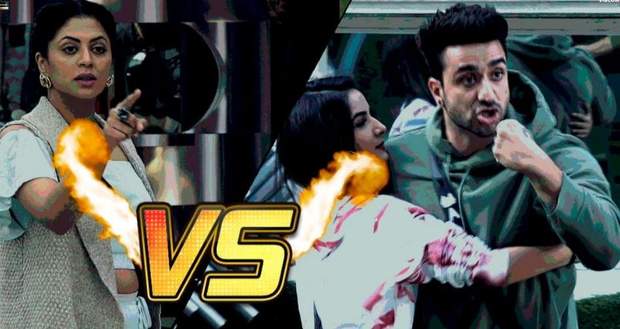 Today's Bigg Boss 14 24 November 2020 episode starts with Pavitra Punia asking if Eijaz Khan if he made the pan hot to which he replied no.

Big Boss Day 53 starts with everyone waking up to the song 'Bach Ke Rena Re Baba'.

Pavitra tells everyone about last night's incident while Aly Goni and Nikki Tamboli also say that they saw something black moving last night.

Jasmin Bhasin tells Abhinav Shukla that Kavita Kaushik is fake during conversing with him.

Nikki and Kavita are talking about the nominations while Aly is making fun of them.

Jasmin talks about the washroom cleaning while Eijaz tells her to not talk about it after which they argue.

Rubina Dilaik and Abhinav gossip about other contestants.

Aly talks badly about Kavita and how he talked back with her.

Bigg Boss announces that if a mistake is done on purpose then it is not a mistake but meaningful wrongdoing.

Bigg Boss says that to teach them discipline, Kavita has been given the power to take away contestants' personal belonging if she thinks that they deserve punishment.

Kavita takes Aly's trimmer and puts it in the dustbin while Aly demands a reason.

He does not agree with the reason and takes his things from the dustbin due to which Kavita fights with him.

Jasmin intervenes due to which Kavita tells her to shut up and they get into a verbal spat.

They have a very heated fight regarding the statement while Aly kicks a chair and the dustbin.

Afterward, Kavita tells Bigg Boss to get her out of here.

Rubina fights with Kavita regarding the topic of friendship.

Nikki consoles a crying Kavita after her fight with Rubina.

Bigg Boss announces that Aly's actions towards the Bigg Boss property and the contestants were not acceptable due to which he is nominated for the rest of the week as a punishment.

Kavita tells Aly that he will not look ugly if his footwear is taken from him.

Nikki sides with Kavita and fights with Pavitra.

Kavita argues with Jasmin and tells Aly to keep Jasmin away from her to which he says that he is not going to come in between them.

Aly's shoes go in the dustbin.

Big Boss announces that although Kavita tried her best, she was not successful in her duty and thus is out from the next week's captaincy race.

Bigg Boss allows Jasmin to save Aly's shows if she gives all of her personal belongings to Bigg Boss.

She declines the offer saying that Aly likes to see her all glammed up.

Further, Bigg Boss berate other contestants for not letting the task go on and especially Abhinav as he turned the dustbin upside down and sat on it.

Bigg Boss tells Abhinav to give all his items to him as a punishment.

Rubina helps him pack his belonging while Eijaz is seen telling others about Pavitra feeling like she's hit on the neck without anyone hitting her.

Rubina berates him and tells him to play the game safely.

© Copyright tellybest.com, 2020, 2021. All Rights Reserved. Unauthorized use and/or duplication of any material from tellybest.com without written permission is strictly prohibited.
Cached Saved on: Tuesday 8th of June 2021 12:27:13 PMCached Disp on: Wednesday 16th of June 2021 06:56:35 AM