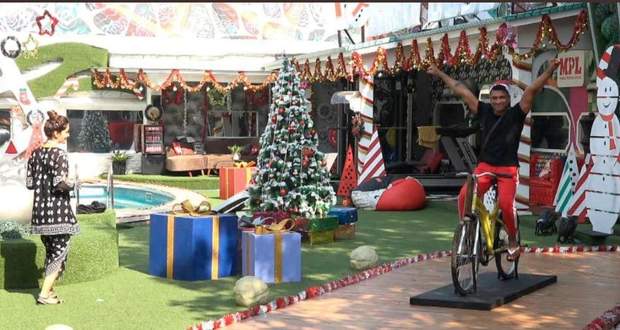 Bigg Boss tells them that some contestants think that the contestants who came back have an advantage over them and gives them a task to chooses two housemates from Nikki Tamboli, Rahul Vaidya, and Aly Goni who they want to put in jail.

The housemates sit to cast their votes while Rahul V. and Eijaz Khan target Rubina Dilaik saying that her tone for talking is authoritative.

Vikas Gupta reveals about Eijaz blaming him and unravels dome private information. Eijaz goes to him but others held him back while he gets hurt in the process.

The housemates argue during the discussion and cannot conclude due to which Bigg Boss announces that all three of them will be jailed.

Bigg Boss states that only one housemate will be present in a single cell and that the cells must be occupied at all times.

Nikki states that she will not go into the cell at any cost while Aly and Rahul going the two cells.

At night, Nikki and Rahul are sitting inside the cells while Arshi Khan comments on Rahul V. playing safe.

Bigg Boss Day 84 starts with everyone waking up to the song 'Buddhu Sa Mann' while the house is decorated for Christmas.

Vikas again puts Nikki in her cell while Abhinav Shukla and Arshi steal an Appy Fizz can.

Bigg Boss says that at certain times throughout the day, one housemate will get to be the postman and the chosen will choose one other housemate whom they want to gift the letter from their family.

However, Rahul V., Nikki, and Aly will not get any letters as they did not do the cell task properly.

Nikki objects that Vikas should also be punished and Bigg Boss punishes him as well.

Housemates get emotional as they get their letters while Rakhi gets a letter from her husband and tells him through the camera to pick aside some time for her from his busy life.