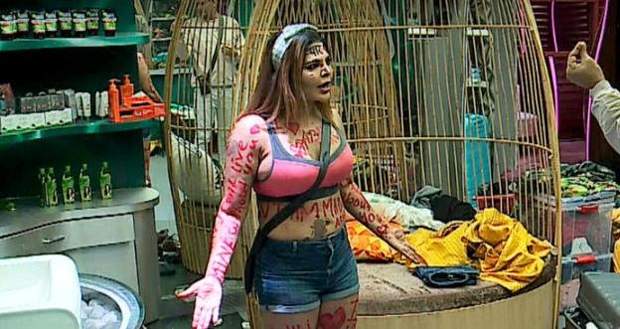 Everyone is discussing the kitchen duties while Rakhi says that she will work only if Abhinav works with her which creates chaos.

Later, Rakhi is doing the dishes while saying that Rubina got successful in separating her and Abhinav while Rubina tells her to not say such comments.

Rakhi says that it's her point of view which create a ruckus while other housemates join the argument.

Rakhi comes out of the bathroom area which 'I love you' and 'Abhinav' written all over it which makes other housemates speechless.

Rubina tells Abhinav to not encourage Rakhi anymore while Arshi tells Rakhi that she's distancing Abhinav and Rubina from herself by doing these kinds of things.

Rakhi follows Abhinav around while he tells her that it is looking like craziness.

Bigg boss announces that it is time for nomination task and says that each area will be assigned to a single housemate and the area of housemates who will be nominated will not be available for them throughout the week.

Bigg Boss tells them to choose which area is to be allocated to which housemate by mutual agreement or majority.

Nikki Tamboli gets bedroom area, while the housemates argue on who gets the kitchen area.

All the housemates complete the task and Bigg Boss tells calls the housemates in the confession one by one and ask them to give two names whom they want to nominate for elimination.

At the end of the task, Nikki, Vikas, Rahul and Devoleena Bhattacharjee are nominated while Bigg Boss announced that the area to be unavailable for the housemates will be bedroom area, Gym area, Spa area and block 2(toilet and shower).

Housemates are arguing while Bigg Boss announce that Arshi broke the rule by going inside the spa area and gives them the punishment that Arshi's allocated area, that is, the remaining toilet and shower area is also restricted which angers the housemates.

Upcoming Bigg Boss 14 episode update: Abhinav gets into a fight with Aly during nomination task.