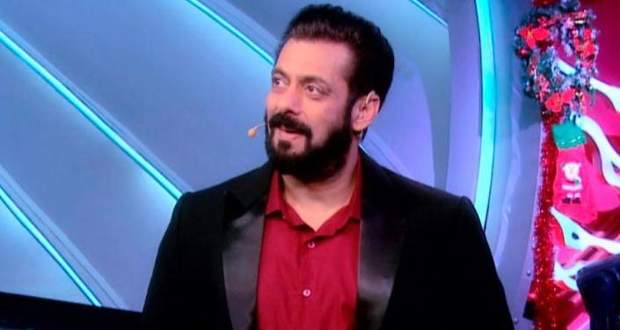 They talk about Eijaz Khan while Nikki Tamboli comes there and says that they cannot trust him.

Salman says that the housemates listened to a special type of radio and inside the house, Rubina Dilaik is seen going into the theatre area and speaking into the microphone as an RJ.

Rubina dedicates songs to housemates while humorously commenting about them and the housemates' dance to the songs.

Rubina makes Jasmin Bhasin and Aly Goni look into each other's eyes and asks them questions while the housemates answer for them.

Salman greets the housemates and asks them how their week went.

Salman says that he advised them to take Captaincy's task seriously and that he has major twists due to two housemates.

Later, Salman praises Nikki for her gameplay and asks the housemates why Rahul V. has the majority of support.

Suddenly, Salman starts berating them and says that they had a herd mentality in the task when they supported Rahul V.

Salman says that it is upsetting that they do not take the game or themselves seriously.

MPL caller of the week, Tejasvi asks Abhinav why he thinks that Rahul V. is only in the game because of Aly.

Rahul V. confronts Salman and tells him to not say that he ran away from the show which sparks an argument between the two.

Inside the house, Rahul V. gets emotional and housemates try to cheer him up.

Harsh Limbachiya enters the house with a child comedian dressed as Santa and gives the housemates a task where they are given a gift and a note.

The housemate may choose from others whom he wants to gifts the item by reading the note stating whom it resembles.

Salman again greets the housemates and says that he will reveal the eliminated contestants' names tomorrow and bids them goodbye.

© Copyright tellybest.com, 2020, 2021. All Rights Reserved. Unauthorized use and/or duplication of any material from tellybest.com without written permission is strictly prohibited.
Cached Saved on: Thursday 28th of January 2021 01:04:52 PM