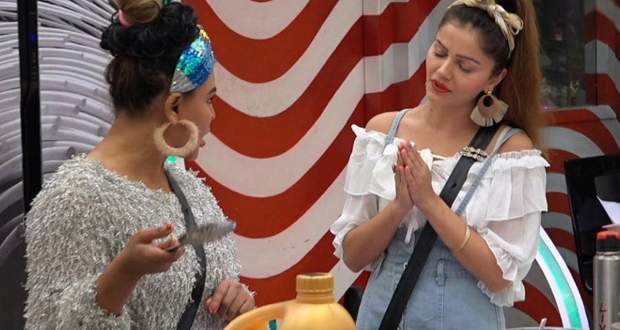 Today's Bigg Boss 14 26 January 2021 episode starts with (Bigg Boss Day 115) starts with Bigg Boss announcing that the bedroom area is going to be unlocked for 5 minutes and tells them to get what they need in that time.

Bigg Boss also warns that if anyone stays in the bedroom area after the buzzer sounds then all of them will be punished.

All the housemates bring of the mattresses with their belongings.

Vikas Gupta tells Arshi Khan that he has all the recordings of her and threatens her that he will release the recording to prove how she blackmailed him.

Elsewhere, Rahul Vaidya sings 'Channa Mereya' while Rakhi Sawant sits next to him and paints Abhinav Shukla's painting red with lipstick and puts it in the storage room.

Later, Vikas gathers Aly Goni, Arshi, Abhinav and Nikki Tamboli and tells them about the story of his family.

Vikas tells the housemates that Arshi blackmailed him of leaking her call recordings with his mother to media and the reason for him telling his mother to leave due to being broke.

Bigg Boss Day 116 starts with everyone waking up to the song 'Yahan Ke Hum Sikandar'.

Rakhi is cooking while Rubina Dilaik to step away and let her to her duty.

Rakhi tells her that everyone was hungry while she responds that she wants to show others that Rubina is not working.

Rubina argues with her while Rakhi mocks her by doing weird things.

Rubina reads from the Bigg Boss rulebook about the task which will reward some of the housemates the use of restricted areas and some of the luxury items from BBMall.

Rubina states the instructions of the task 'School rivalry' in which the red team includes Arshi, Abhinav, Rubina and Nikki with Vikas as the coordinator of the task and the rest in the yellow team.

The team to have one intact cycle at the end of the task will win the task.

The task starts and housemates steal, break and throws the cycles into the pool.

Abhinav tries to break Aly's cycle while others come there and try to stop him.

Upcoming Bigg Boss 14 episode update: Abhinav and Aly get into a physical fight.

© Copyright tellybest.com, 2020, 2021. All Rights Reserved. Unauthorized use and/or duplication of any material from tellybest.com without written permission is strictly prohibited.
Cached Saved on: Tuesday 2nd of March 2021 10:25:18 AMCached Disp on: Friday 5th of March 2021 09:22:23 PM