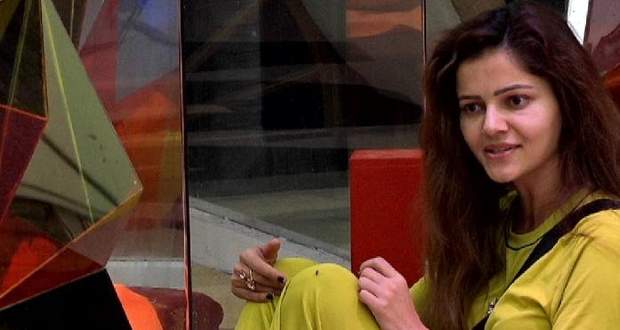 Today's Bigg Boss 14 26 November 2020 episode updates starts with Rubina Dilaik and Pavitra Punia fighting over the topic of food while others join in.

Nikki Tamboli wants to sleep in the bedroom area but Rubina denies her access.

Nikki tells Kavita Kaushik to let her sleep in the bedroom area. Kavitha denies it saying that she wants to be fair to others which spark an argument between them.

Rubina tells Abhinav Shukla to give only quilts and not pillows as there are pillows outside.

Eijaz discusses with Pavitra to let Nikki inside as she has a fever. But Pavitra tells him to wait a few minutes.

Eijaz lets Nikki in due to which Abhinav and Pavitra argue with him.

Nikki steals the make-up brush while Abhinav witnesses it after which he and Rubina tell her to put it back but she doesn't.

Rubina and Abhinav order Eijaz to get her out of the bedroom area without the brushes as it is his responsibility.

Abinav tells Jasmin to bring Nikki out but she doesn't but Abhinav uses the kitchen area and Jasmin stops him.

Kavita begs her to get out while Eijaz collects all her belongings in a mattress sheet.

Big Boss Day 55 starts with everyone waking up to the song 'Thug Le'.

Nikki wants to get out but Eijaz stands in the way while Abhinav and Rubina sit against the door.

Rubina gives her mic batteries but she throws them away while Jasmin tells her to let Nikki out.

Rubina tells her to not sugarcoat her words.

Rubina and Jasmin get into a verbal spat while Aly Goni supports the latter.

Rahul Vaidya jumps into the argument while Rubina argues with him.

Nikki tries to slide from the door and Abhinav sits up letting her go.

Abhinav argues with Rubina cause she was talking to Rahul and Nikki.

Nikki takes advise from Aly and tells Eijaz to put her things back or she will put his belongings in the toilet.

Rubina tells Jasmin that they agree and tell her to not damage their belongings.

Rubina wants to look at their belongings but Jasmin doesn't allow it and pushes her to the door which makes the door break.

Jasmin asks everyone what they want and everyone gives her answer except Rubina which makes other team members rebuke her.

Rubina berates her team after which Abhinav gets into a fight with Jasmin regarding the portion of breakfast.

Jasmin again gives them breakfast while Rubina taunts Abhinav saying that he begged and they gave.

Abinav tells Rubina to eat something while she tells him to let her play her own game and they fight.

Abhinav eats lunch while Rubina complains about the food portions to Kavita.

Kavita confronts Jasmin regarding the same and gets into an argument while Abhinav also joins.

Rubina is talking to Kavita while Jasmin walks in between them.

Kavita tells Rubina to eat but she declines to say she has self-respect.

Upcoming Bigg Boss 14 episode update: Bathroom to be the next place up for Batwaara.